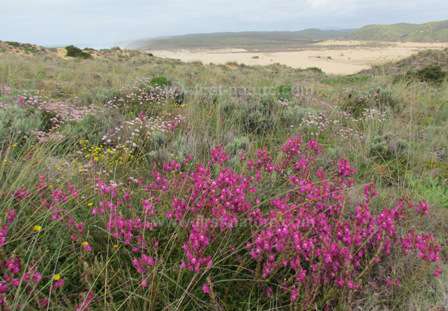 The colourful wildflowers in the sand dunes at Carrapateira. In the forground are wild Snapdragons.

The coastal dune systems of Europe are one of the most abused of all our natural habitats, and so a walk in the midst of the abundant wildlife in the entirely natural dune system along the coast of the Cape St. Vincent Natural Park at the village of Carrapateira is quite an eye-opener.

Coastal dune systems are as attractive to Man as they are to the thousands of wildlife species that depend on this hostile environment for their survival, but in most cases Man has been the victor in this territorial battle - not that his fight has been an easy one.

Left to their own devices, dune systems are highly mobile and can cover a building in the space of hours during an onshore gale at low tide. Mobile homes and caravan parks would disappear almost in the blink of an eye if we had not tamed the dunes by stabilising them with vegetation. 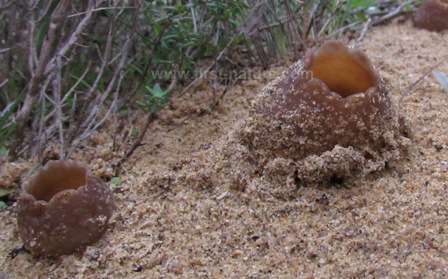 In autum the dunes are full of interesting fungi species which are adapted to suit the hostile conditions. Above Geopora arenicola, is a fairly common species in sand dunes in southern Europe.

Marram Grass is the weapon of choice in this particular battle. Not only did this deep-rooting fast-growing plant secure the area by preventing sand from being blown about wholesale, but it also provided employment over the centuries: many seaside communities made and sold baskets from the tough stems and leaves of Marram Grass.

It is only in recent years that conservationists have discovered that by stabilising dunes we have driven literally to the point of extinction hundreds of plant, beetle and other species that had evolved over millenia to thrive in a place that we couldn't. These so-called 'pioneering' species need 'new' sand blown in from the sea bed during low tide in order to establish new homes and hunting grounds. Today many countries, including Holland and the UK, are actively de-stabilising dune systems using digging machines to create 'blow-outs' - patches of bare sand that normally occur in active dune systems.

To date the evidence suggests that this strategy is working and that endangered plants and creatures are making a comeback to the places where they were once common.

If you are travelling along the A22 toll road in a westerly direction you should take the exit signed to Vila do Bispo and Lagos, which is Junction 1. Keep following signs towards towards Vila do Bispo, which will take you onto the N125. From Vila do Bispo follow the N268 north towards Aljezur; Carrapateira will be signed off to the left. There is a circular drive around the sand dunes, but most of the roads are not tarmac and the surface quality varies considerably throughout the year depending on how recently the tracks have been graded.

There are no facilites once you get into the dune system away from the village, but there are cafes and shops in Carrapatiera.

It is possible to walk almost anwyere throughout the dunes, and there are a number of boardwalks along the edge closest to the sea although some have steep steps and are therefore not suitable for wheelchairs or prams. The boardwalk closest to the village is the best one for people with mobility problems. Ongoing maintenance, or lack of it, could present difficulties from time to time.

General Description of the Site

Sand dunes form as a natural consequence of sand being blown inland from the exposed seabed when the tide is low and the wind isin the right direction. They start as small pioneering mounds of sand which are deposited above the high tide level of the beach. Very few creatures can survive in this harsh windswept and salty environment. The sand is gradually moved inland to form tiers of sand dunes behind the small ones at the front, and as these dunes become larger they are colonised by plants and animals specially adapted to live in this type of environment. The further inland the dunes are, the more protected they are from the salty gales and other plants and animals take over.

The plants that inhabit this inner part of the dunes are bigger, and eventually they stablise the sand and, as they die back each year, the rotting vegetation enriches the sand turning it into a very different type of substrate which, in turn, plays host to yet further plants and animals.

Sand dunes which are mobile and actively forming new tiers are known as accreting dunes. In between the dunes there are flat areas called dune slacks, which become submerged with water during heavy rainfall. Dune slacks retain more moisture throughout the dry season, and so they form yet another unique habitat that is colonised by specialist plants and animals. 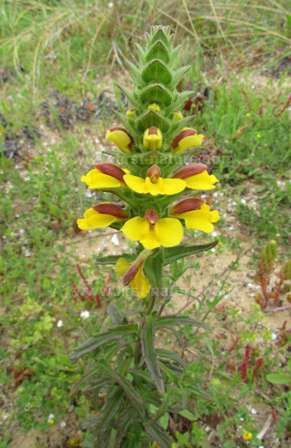 The eastern Algarve sand dune system at Carrapatiera, along with those at Monte Clerigo and Odeceixe near Aljezur, Alvor in the centre of the Algarve and Ria Formosa in the eastern Algarve, are among the very few natural dune systems remaining in Europe. At the western end of the Algarve they are protected within Parque Natural do Sudoeste Alentejano e Costa Vicentina, in the centre by Ria Alvor Nature Reserve and, in the east, at Parque Natural da Ria Formosa. These dune landscapes are not only lovely places to walk in to enjoy the coastal scenery, but they also provide rare and precious opportunities to study wildlife that cannot live in any other habitat.

Carrapateira also has spectacular coastal cliffs with beautiful views out to sea and along the coast in both directions. During stormy weather the waves are particularly impressive, and this is a favourite spot for surfers.

From March until the end of May the spring flora in the dunes at Carrapatiera is spectacular. This is one of the best places to see Wild Snapdragons Antirrinhum majus, which are usually red but occasionally yellow. The yellow-and-red form of Bellardia Bellardia trixago is also more common in the dunes than elsewhere in the Algarve, where the pink-and-white form is more often seen.

Of course, the invasive Hottentot Fig Carpobrutus edulis is unavoidable here, and it forms vast mats of both colour forms - pink and yellow. Both Sweet Alison Lobularia maritima and Evergreen Candytuft Iberis sempiverens occur in large mats along with Thrift Armeria maritima; and both colour forms (pale yellow and purple) of Honeywort Cerinthe major occur here too.

Shrubby Pimpernel Anagallis monelli is also a great feature of this habitat. The bright blue flowers dominate the scene in springtime, but amongst them are some unusual and perhaps less attractive plants which fit the 'interesting' category: the enormous broomrape, Orobanche foetida is common in the dunes, sometimes growing up through the tarmac on the side of the road.

The closeness of Carrapateira to the Sagres Peninsula, which is so famous for its birds, means that there is a good chance of seeing some of the avian species for which the area is so famous. It is regarded as the top venue in the Algarve for seeing raptors during the autumn migration in August and September, and each year some 5,000 birds pass through. All of the raptor species known in Portugal are recorded here each year. Particular species to look out for in the autumn include the Eurasian Dotterel, Elenora's Falcon, Red Kite, Spanish Imperial Eagle, Short-toed Eagle, Booted Eagle, Egyptian Vulture, Black Stork and the Eurasian Griffon Vulture. 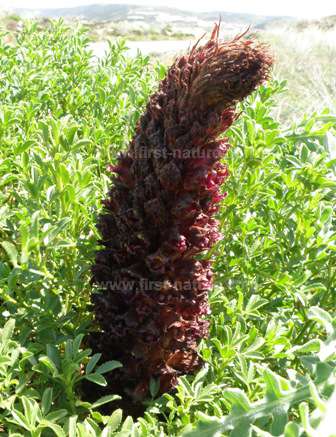 This broomrape species, Orobanche foetida, grows up to a metre in height in the sand dunes at Carrapateira

During the rest of the year Red-billed Chough, Blue Rock Thrush, Black Kite and European Honey Buzzard are recorded, while the scrub growing in the dunes makes this an ideal area for the Common Crested Lark to nest and raise young. In autumn when the weather has been particularly dry, standing water in the area has been known to attract the extremely elusive Ring Ouzel.

Autumn is also the best time to see the highly specialised fungi that grow in sand dunes, and this is a particularly good place to see so-called cup fungi. These strange-looking species, such as Geopora arenicola (pictured above) do not look much like the mushrooms that most people recognise as fungi. Rather than shedding spores from gills on the undersurface of a typical cap and stem fungus, these weird fungi disperse their spores from the upper surface of cup-shaped growths that appears above the sand. Dispersal is sometimes triggered by rain drops or by a gust of wind passing over the fungus. Other fungi found in sand dunes include the Dune Mushroom Agaricus devoniensis and the Winter Stalkball Tulostoma brumale.

Sand dunes in the winter, and in the Algarve also in high summer, can seem bleak and colourless, but in spring (which comes very early in the Algarve) and autumn they are magical places to visit. The diversity of wildlife is truly amazing and the botanists, birdwatchers and fungi fans among us cannot fail to have an enjoyable and illuminating walk.

The added bonus to a visit to Carrapateira is the breathtaking coastal scenery, which is an all year round attraction.