Rocha da Pena - a walk up a limestone escarpment with fascinating flora, birds and other wildlife

The walk at Rocha da Pena is quite an uphill hike at the beginning, but there is so much to distract the wildlife lover that the effort is well and truly rewarded. At each turn in the winding track upwards are small grassy areas which are full of the wildflowers that make this such a famous place, and which offer excellent reasons to stop along the route for a breather and to take some photographs.

If Quinta do Ludo is Algarve’s Coto Donaña (A National Park in Spain) then Rocha da Pena is Algarve’s Table Mountain. This sítio classificado is spectacular to look at. There are panoramic views from the top, a good variety of wildflowers, special butterflies, the impressive cave Algar dos Mouros, an Iron Age wall and above all a well-marked 6.4 km trail. Birds are not obvious but over 70 species have been recorded there. A short side trail leads to the summit, Talefe, 479 metres. As the trail drops off the plateau it passes through Penina, which is still very much a traditional village of the Algarvian serras. The final amble back to the start point passes impressively beneath Rocha da Pena escarpment. 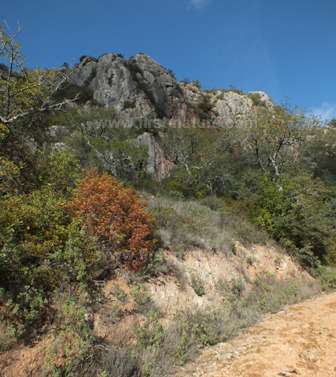 Reports of the number of plants recorded at Rocha da Pena vary wildly but it seems safe to assume that there are at least 400 different species in the area. It is also very rich in birdlife with well over 70 species having been recorded there. 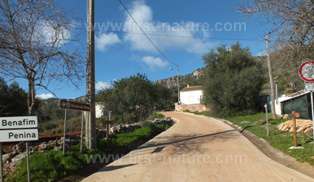 The start of the walk in the village of Rocha

Some of the famous mammals of the Algarve live at Rocha da Pena: the Genet, the Wild Boar and the Mongoose have been reported, along with the more common Fox, Rabbit and Hedgehog. The rocky caves in the limestone cliff also play their part in providing homes for wildlife, and two endangered bat species roost and raise their young there - Schreiber's Bat (Minopterus schreibersii) and the Lesser Mouse-eared Bat (Mysotis blythi).

No matter what time of year you visit Rocha da Pena it seems there is an absolute guarantee that you will see and enjoy some wildlife during your visit. The views from the top across the typical Barrocal landscape for which this part of Portugal is famous are also spectacular. 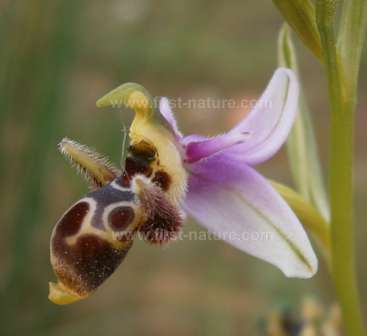 To get to Rocha da Pena drive north from the A22 to Loulé and from there follow the signs to Salir. From Salir turn west on the N 124 towards Alte and after 1 km, turn right at Taipa and shortly after left on a minor road to the hamlet of Rocha (signposted Rocha da Pena). Park the car, pick up a pamphlet (and have a bica - Portuguese espresso) at the friendly café Bar das Grutas and begin the trail right there.

The cafe, Bar das Grutas, is right beside the start of the walk in the village of Rocha (signed as Rocha da Pena), and refreshments are available in another village, Penina, following your descent from the plateau if you are walking the complete circular route. There are public toilets in Penina.

The track is rough and steep at the beginning, and also very rocky at the top and crossing the plateau. There are few easy or smooth parts on the circular walk, and the descent is steep and rocky in places with the additional hazard of a lot of loose rubble on long stretches of the path. Good foot wear is essential.

Be sure to take sunblock with you and plenty of water. It is not suitable for prams or wheelchairs, or for those with mobility problems. 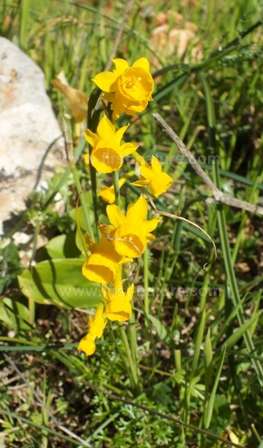 Narcissus calcicola is a rare plant endemic to the Iberian Peninsula.

Calcareous soils (with high levels of chalk content) are famous for their wild orchid populations and Rocha da Pena is no exception; this is an excellent place to see many of the orchids for which the Algarve is very well known, paticularly the Ophrys (Bee Orchid) species. They flower early in the Algarve and so you can expect to find flowering plants from the end of February onwards. The pioneers are the Bumblebee Orchid (Ophrys bombyliflora), the Yellow Bee Orchid (Ophrys lutea) and the most well known orchid of the region, the Mirror Orchid (Ophrys speculum). You may also find the Mirror Orchid's rather less attractive close relative Ophrys lusitanica which is also one of the iconic orchids of the region. Other lovely surprises to appear are Southern Early Purple Orchids (Orchis olbiensis), and later, the Naked Man Orchid (Orchis italica) and also the Woodcock Orchid (Ophrys scolopax).

Of course, it is not only wild orchids that like chalky soils and numerous other gorgeous wildflowers grow at Rocha da Pena: Scilla peruviana with its vivid blue pyramidal clusters of flowers is common in this area, and so is the stunning Iberian endemic Wild Peony (Paeonia broteroi). Three lovely spring bulbs to occur very early in the year are the Paperwhite Narcissus (Narcissus papyraceus), Narcissus bulbicodium, and if you are at Rocha da Pena in the very early spring (February), you may find the rare Iberian endemic Narcissus calcicola. This lovely wildflower is right at the top of the walk and can be found in clumps across the plateau and on the way down the way down on the Penina side. Narcissus calcicola is known from a few places in Portugal and Spain and is a Red Data List species. Please do not pick the flowers or dig up the plants. There are a number of suppliers, that can be found on the web, who cultivate this plant successfully and from whom you can buy bulbs.

In late January and early February the almond blossom at lower levels of the walk is spectacular.

The pamphlet about Rocha da Pena mentions Bonelli’s Eagle, Eagle Owl and various mammals but do not expect to see them. There are plenty of signs of Wild Boar but the only mammals likely to be seen are ubiquitous Rabbits.

Thermals over the escarpment often attract birds of prey. In late autumn Ring Ouzels occur on the plateau and in winter Alpine Accentors occur on the cliffs. Dunnock is a scarce winter visitor to the Algarve but can usually be found here. There is a typical breeding population of mostly smaller birds including a few pairs of Dartford Warblers among the much commoner Sardinian Warblers. Iberian Green Woodpeckers are common on the wooded slopes and sometimes excellent views of this distinctive Iberian endemic species can be obtained. Blue Rock Thrushes breed on the cliff face and the rare Rufous-tailed Rock Thrush has occurred on passage.

The path is well-trodden on the circular walk, but if you wander off a short distance there are many botanical gems to be discovered. After the intital climb from the village of Rocha it is possible to walk up to some old windmills situated on the top of the plateau, and it is in this area that many of the wild orchids that grow at Rocha da Pena can be found, along with many other beautiful wildflowers. To complete the circular walk simply retrace your steps, or to go back down to the outskirs of Rocha village you can walk directly down, passing through a small farm and ending up at the main road.