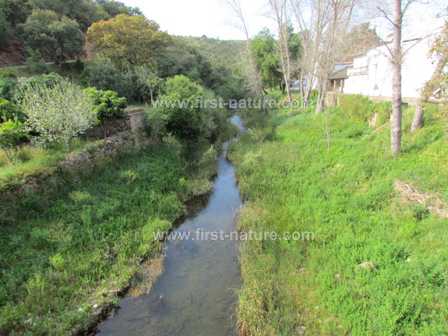 The stream that rises at Fonte de Benemola

Fonte de Benemola is a natural spring that continues to flow even in the hottest and driest weather in the Algarve, and this lovely spot still has lush vegetation along the stream banks when the rest of the landscape is brown and arid.

The site was designated to protect its wildlife in 1991, and the well-trodden circular walk around the reserve is easy to follow and not too taxing. A gentle stroll, allowing time to take photographs, will take around one and a half hours.

Fonte de Benemola lies north of Loule and can be found by taking the road north to Querença for around 8 kilometres. Take the first left turn signed to Querença, but then ignore the second one and continue straight along the road, passing through a small village called Pombal. Approximately one kilometre beyond Pombal you will see a sharp right hand turn into the parking area for Fonte de Benemola. The car park has an information board about the wildlife of the reserve and also displays a map of the circular walk.

On our visit we chose to walk the route in the anti-clockwise direction taking the path directly from the car park into the reserve. 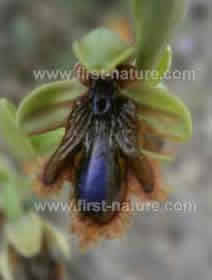 The first part of the walk takes you along the track which eventually leads down to the spring. On the right hand side there is a drystone wall, while on the left, the land slopes down into the valley. Some of the land is still farmed and there are meadows with olive and citrus trees which are full of wildflowers in the spring. Once you arrive at the stream at the bottom of the track you can choose to use the stepping stones to cross and continue on the shorter circular route, or continue on and take the longer route.

Because the surrounding landscape is mainly limestone this is a very good place to see a number of the wild orchid species that occur in the Algarve. Although the weather had been intensely hot just before our arrival in April we still found six orchid species in flower: Woodcock Orchid (Ophrys scolopax) was in full flower on the shaded 'return' part of the walk, and we also found Man Orchid (Orchis anthrophorum), Yellow Bee Ophrys (Ophrys Lutea), Broad-leaved Helleborine (Epipactis helleborine) not quite in full flower, and Mirror Orchid (Ophrys speculum) flowering alongside its strange subspecies Ophrys lusitanica. This is also one of the sites where the Sword-leaved Helleborine (Cephalanthera longifolia) occurs, and depending on the season, mid April is usually a good time to see it. It is more common in the central and eastern Algarve area than in the extreme western part.

The distribution of Ophrys lusitanica is centred in Algarve region of Portugal, but it is nowhere near as common as its lovely relative, the Mirror Orchid, which is found almost everywhere in the central and western parts of the Algarve from March until the end of April. Another good place to see it is at Boca da Rio, out towards the west of the Algarve between Lagos and Cape St. Vincent. Formerly known as Ophrys vernixia, Ophrys lustianica only occurs in Spain and Portugal although a similar looking orchid grows in parts of Greece - Ophrys Regis-ferdinandii - also described as a subspecies of the Mirror Orchid. 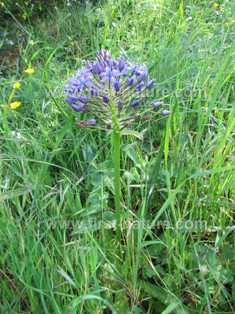 Of course, orchids are not the only lovely plants to be seen at Fonte de Benemola and amongst them we found Scilla peruviana. This member of the Lily family (Liliaceae) is native to the western Mediterranean but is not always easy to find. Roadside verges in the Alte and Rocha da Pena area seem to be a good place to start, and we also found a large colony on the side of the road towards Fonte de Benemola just outside Querenca. It is an impressive plant with its large cone-shaped infloresence emerging from a rosette of basal leaves. The flower stem can grow up to around 20cm in height, and some are more densely packed with the purple star-shaped flowers than others.

Another of my favourite Mediterranean wildflowers that also grows at Fonte de Benemola is Fringed Rue (Ruta chalapensis), and a close look at the yellow flowers with their green centres always makes me marvel at the complexity of nature. The 'fringed' part of its common name refers to the ragged, almost frothy, edges of its petals.

Trees and shrubs are a special feature of the walk around Fonte de Benemola with impressive displays of Cistus on the slopes (Including the less-common Narrow-leaved Cistus) as well as various species of gorse. Tall stems of pink Phlomis brighten up the sides of the track; their furry leaves, which so resemble those of Sage, have no discernible scent at all.

The diversity of flora leads to good insect life, and we saw numerous butterflies during our walk. They all proved as difficult as ever to photograph. Among them was Marsh Fritillary (now rare in the UK), Swallowtails, and the Spanish Festoon which is as dazzling as its name suggests. 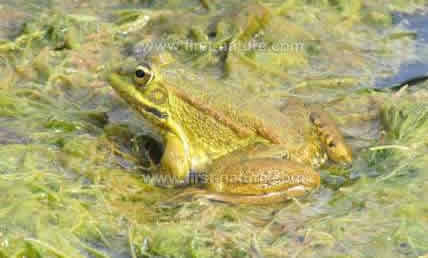 Iberian Water Frogs can be seen and heard in the millpond at the end of the walk.

In the rocky cliffs above Fonte de Benemola are caves, and it was here that the Mouse-eared Bat was first identified in the Algarve. These bats roost and breed in the caves and, along with four other species, can be seen in the evenings hunting along the valley, where the high levels of moisture created by the stream and maintained by the tree canopy make it the ideal home for the numerous species of small insects on which the bats feed.

The final (or first if walking clockwise around the loop) part of the walk takes you past the old mill, which is on the road running between the two entry points to the circular walk. A loud chirruping noise from the direction of the millpond alterted us to the frogs that live there. If you approach very gently you will see the Iberian Water Frogs (Pelophylax perezi) perched on the thick layer of weed on the surface of the water. They will not allow you to get too close, but if you are lucky a good zoom lens will get you some rewarding pictures.