Rivers with significant water flow are an unusual sight in the Algarve because so much water is abstracted for agricultural purposes. By summertime very little water drains from the rivers into the sea, but in early spring it is possible to see high enough levels of water to support aquatic plants and to attract the birds and animals that depend on rivers for their survival. The Algibre valley is one of the best places to visit in springtime to see some of the very special birds, plants and insects that live in and around rivers. It is exceptionally good for seeing many of the wild orchids of the region. 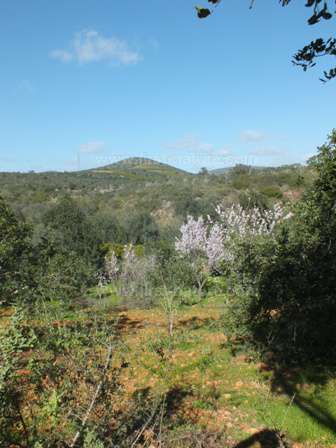 The walk described here is of approximately 60 minutes duration (in either direction), and that allows plenty of time to stand, stare and take photographs. It is also possible to continue a longer, circular route described in Julie Statham's book 'Let's Walk', which is available from some bookshops in the Algarve and via Amazon. This longer route takes you up onto the plateau above the river and through abandoned farmland which is also very wildlife-rich and well worth the effort if you don't mind a steep scramble on the way back down to the river valley. A short version of the walk, which enables you to see much of the scenery of the river valley and a lot of the wildlife, involves walking down to the Algibre waterfall just beyond two old ruined farm buildings on the left of the track and then retracing your steps to where your vehicle is parked.

If plants are your main interest the best time to visit this lovely peaceful valley is between February and May. The valley is sheltered and has a high level of moisture because of the proximity of the river. Up on the plateau the flowers will be dying back by the beginning of May, but the bird and insect life there will still be considerable until the real heat of the Algarve summer arrives in July and August. 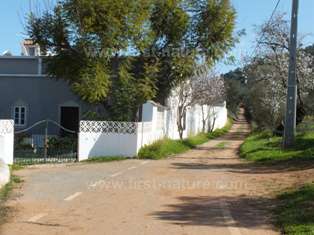 The start of the walk to the river is along the track to the right of the house pictured above.

From the A22 toll road take the Albufeira exit at Junction 9 and follow signs towards Albufeira (stay on this road until you see Paderne signed off) and then to Paderne, taking the N395 in a northerly direction. Continue along the N395, passing through Purgatorio, until you reach Paderne, and then drive through the village. Paderne is one of the better-signed villages in the Algarve!

About a kilometre outside the village you will see a turn to the left signed Moinho Novo - take this turn and continue for a distance of approximately 2 kilometres until you come to a sharp, right-hand bend in the road. At this junction there is a track to the left and a tarmac road straight ahead. Take the road ahead, not the track to the left. If you start to climb a hill you have driven too far. After a short distance you will come to a reasonably open area where several cars can be parked. Park here and continue ahead on foot passing the house pictured on the left. It is also possible to park a couple of cars at the earlier junction at the sharp right-hand bend.

There are no facilities at the beginning or during the walk, but there are shops and cafes in the village of Paderne. The first part of the walk is easy, and the ascent to the plateau above the river is reasonably gentle although rocky underfoot. Walking along the plateau is also easy, but the descent back down into the valley to rejoin your car is not for the faint-hearted; it is steep and variously rocky or covered with loose rubble and boulders and great care is needed. Good sturdy footwear is absolutely essential for this walk. It is not suitable for wheelchairs, prams or those with mobility problems. 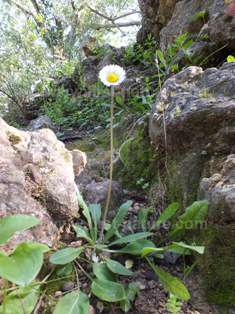 The early-flowering Bellis perennis subspecies sylvestris grows near the river.

The first part of the walk is level, passing through attractive farmland consisting of orange groves, almond trees and olive trees. Once you reach the top of the first gentle incline, the views across the valley are really beautiful, particularly in springtime when the almond trees are in full flower.

The right-hand edge of the track throughout the walk towards and along the River Algibre benefits from collected moisture which runs down the steep bank. As a result, this side of the path is particularly rich in plant life. This part of the Algarve, along with Alte and Rocha da Pena, has soils with high alkaline content which is also a good indicator for wild orchids and other chalk-loving wildflowers.

Our first visit to this lovely area was in very early spring (February) following an exceptionally mild and rainy autumn and winter in the Algarve. Our primary aim was to find some of the early spring flowers - Yellow Hoop Petticoat Daffodil - Narcissus bulbocodium, Paperwhite Narcissus - Narcissus papyraceus and Spanish Bluebells - Hyacinthoides hispanica. We found all three in abundance. We also found Bellis perennis (subsp. sylvestris) which is a very early-flowering tall daisy, Anemone palmata and Erophaca baetica, a shrubby, white-flowering member of the pea family which comes into flower in the Algarve from December and continues well into spring. The lovely Scilla peruviana was also present in vast numbers although only in tight bud. A slightly later flowering spring bulb which grows on the track bank is Tulipa australis.

Up on the plateau above the river valley, Rosemary was in full flower along with gorse, broom and many other shrubs, and it was up here in a sheltered position beside the path running through old pastures that we found Orchis conica - see below. 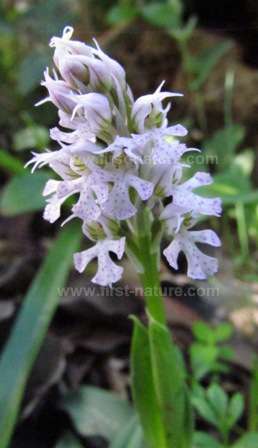 Orchis conica is a special feature of the area around the River Algibre.

In early spring look out for the pioneer orchid species such as Bumblebee Orchid - Ophrys bombyliflora, the Yellow Bee Orchid - Ophrys lutea and the starring species of the Algarve, the Mirror Orchid - Ophrys speculum. These orchids will be found in the more open and sunny parts of the valley. You may also find the Mirror Orchid's rather less attractive close relative Ophrys lusitanica, which is another of the most sought after orchids of the region. Man Orchid - Orchis anthropophora, and Sword-leaved Helleborine - Cephalanthera longifolia are also known from this valley. Two very rare species found here make this place truly special - the Orchis conica and Autumn Lady's-tresses - Spiranthes spiralis. Orchis conica is rare and very localised in the Algarve. In other parts of the Mediterranean this species is confused with two similar-looking orchids, Toothed Orchid - Neotinea tridentata and Milky Orchid - Neotinea tridentata subsp. lactea and so the true distribution of Orchis conica in Europe is far from clear. In the Algarve, however, neither Orchis tridentata nor Orchis lactea* are confirmed as being present, and so you can be confident that you really have found Orchis conica if you are lucky enough to spot this diminutive orchid, which is not averse to hiding behind taller vegetation and bushes in order to thwart your attempts to find it.

*Although it seems that there are sufficient differences in the appearance of Orchis Conica and Orchis lactea to justify separate spcecies classification, some believe that they are the same species and that the minimal differences in colouring etc are purely the result of geography rather than the many other complex factors, including different pollinators, which could determine the truth of the matter.

Spiranthes spiralis is a late-flowering summer species in the UK and northern Europe, being found in short-sward, grazed grassland at the end of July and the beginning of August. In the Algarve it flowers even later and can truly be described as an autumn-flowering species, thus living up to its common name. It waits for the first rains of early autumn to descend in this parched landscape, and is found on the banks of the River Algibre where moisture more quickly reaches premium levels. October and November are the earliest months to go searching for this rare (in the Algarve) orchid.

Other orchids to be found along this walk, but later in springtime, include Woodcock Orchid - Ophrys scolopax, and much rarer, Dense-flowered Orchid - Neotinea maculata. Another occasional find in the Algarve also lives along this track - Tongue Orchid - Serapias lingua which is the type species of the Tongue orchids. Sombre Bee Orchid - Ophrys fusca and Omega Ophrys - Ophrys dyris are also present in considerable numbers. 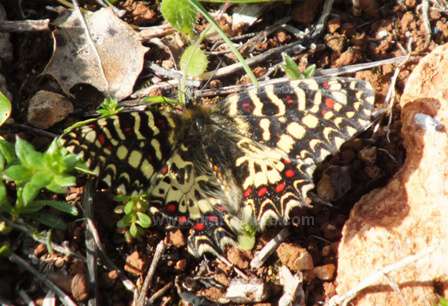 A Spanish Festoon butterly makes an early appearance up on the sunny, open plateau above the River Algibre valley.

Above the river valley on the plateau, the large open landscape attracts birds of prey. In late autumn Ring Ouzels occur up there, and Dunnock, a scarce winter visitor to the Algarve, can usually be found. There is a typical breeding population of mostly smaller birds including a few pairs of Dartford Warblers among the much commoner Sardinian Warblers. During our walk the screaming call of the distinctive Iberian race of Green Woodpeckers was much in evidence, and they are common on the wooded slopes of the valley.

Eyed (Ocellated) Lizards and Montpellier Snakes live above the valley, and later in the spring and summer, the insect life there is spectacular.