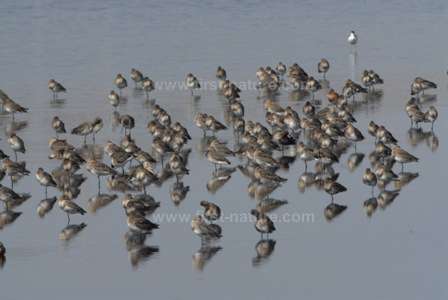 Close to the Spanish border, this is a smallish coastal nature reserve of most interest to birdwatchers, although there are some interesting salt-marsh plants there too.

The reserve is between the lovely little town of Tavira in the west, and the River Guadiana on the eastern side which forms the boundary between Spain and Portugal.

Castro Marim was inhabited in Neolithic times and subsequently became a port which was used by both the Phoenicians and the Romans. The area has a rich history.

The reserve has a magnificent centre with excellent facilities built with the aid of European tax payers money. Regrettably it is seldom open to the public which is a great shame. With cooperation from the staff, the immense interest of bird watchers who travel from all over the world to the Algarve could turn this centre into a high profile and profitable resource for the beleagured economy of Portugal. Fortunately the birds and other wildlife that visit or live in the reserve are unaffected by the failure of the centre and a fine day out can still be had by those who are determined to see and enjoy all that it has to offer.

The Reserva Natural do Sapal de Castro Marim is located close to Villa Real de Santo Antonio on the eastern side of the Algarve, just a few minutes drive from the Portuguese-Spanish border and the Rio Guadiana river, and is well signposted from the main roads. 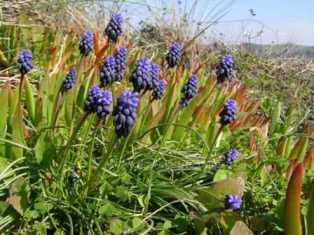 There is ample car parking at the reserve, and a walk of some 12km around the saltpans for those who like to explore. There are information boards, some of which are readable.

The Natural Reserve at Castro Marim was designated in 1975, and the importance of its habitats is recognised by the RAMSAR convention as a wetland of international significance.

The Plants of Castro Marim

Early spring is the best time to visit Castro Marim if you want to see the special plants that are able to survive the inhospitable environment of saltpans, salt-marsh and the brackish-water mudflats in the estuary of the River Guadiana. The pretty Water Plantain with its three-petalled flowers is plentiful in the friendlier and less salty parts of the reserve, and it is accompanied by some of the really early spring bulbs in flower including Yellow Hoop-petticoat Daffodil and Grape Hyacinth. In the 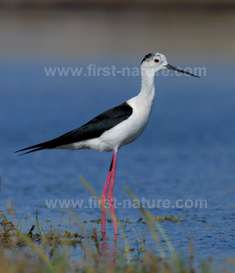 brackish water the special plants include Glasswort and the impressive bright yellow broomrape, Cistanche Phelypaea, which flowers from March and into April. Butterflies and other insects are strangely absent from this area because, although many of the plants have adapted to survive in this salty habitat, few butterfly and other insect larvae are able to thrive or have adapted to live on such plants.

This reserve is a wintering ground, and one of the best places to see the Greater Flamingo along with Avocets, Spoonbills, Black-winged Stilts and many species of ducks. There are also storks nests in trees on the reserve, and it is rather comforting to see them in a natural environment rather than on pylons which they have adopted as the ideal tree substitute when there are few suitable arboreal perches for nests in other parts of the Algarve.

Terns are well represented here including, in the winter, the world’s largest: the Caspian Tern. Sandwich Terns and Little Terns nest on the edges of the saltpans; and Black-headed, Black-backed and Yellow–legged Gulls all visit Castro Marim.

Other birds include Sanderlings and Kentish Plovers which run along the edge of the beaches while Grey Herons and Little Egrets stand patiently in the shallow water waiting for suitable prey to swim in their direction. Whimbrels and and Curlew use Castro Marim as a resting place on their migratory journeys.

This area which lies between Vila Real do San Antonio and Tavira is a massive holiday centre with little to recommend it to anyone interested in a stroll in peaceful surroundings enjoying wildlife, except for one place. The extensive conifer woodland found along both sides of the road leading into the centre of Monte Gordo is a protected area which supports the largest population of European Chameleons in Portugal. As a result of the protection afforded to this endangered reptile at Monte Gordo, it is actually thriving and increasing in number there. If you are visiting Castro Marim, particularly in September, a visit to the woodland at Monte Gordo could well provide you with sight of this fascinating little creature because this is the time of year when it descends from the trees and shrubs, where it lives for the remainder of the year, in order to lay its eggs. On close inspection you will be able to see one of its most interesting characteristics which is the ability to move and rotate its eyes independently.