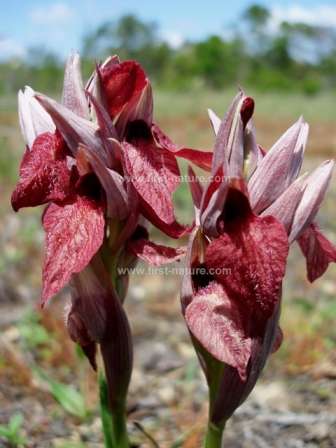 The Heart-flowered Tongue Orchid grows on the edge of woodlands

In so far as we can tell, the orginal tree cover of the Algarve Region probably consisted of Canary Oak and Lusitanian Oak, the latter being a semi-deciduous species. Cork Oak, one of the great features of the countryside in the Algarve, and which continues to provide an income from producing cork stoppers for wine bottles, was probably a later arrival.

These ancient trees have all but disappeared from the landscape, although remnants can still be found on a few north-facing slopes in the hills. They have largely been replaced by fast-growing Eucalyptus plantations for the production of wood pulp. For those who seek woodland wildlife diversity, the novelty of wandering through menthol-scented Eucalyptus woodlands soon wears off and the disadvantages of cash-crop monoculture plantations soon become all too obvious: the soil beneath the trees is quickly degraded, and nearly all the native flora of the region is stifled under a dense blanket of slow-rotting fallen leaves.

The oily nature of the Eucalyptus trees also constitutes a major fire hazard in an area which is already at serious risk of major forest fires. As with other Mediterranean regions that suffer from serious forest fires, many of the native and naturalised trees and plants are specially adapted to be stimulated into growth by fires, although regrettably those who exist in close proximity, and who earn their livings from these trees, do not find it so easy to regenerate their lives after such events. Some fungi species live in the rotting leaves of Eucalyptus, notably Inkcaps, but for real fungal diversity, it is better to head for wooded areas which contain oaks and conifers.

The tough coastal conditions in the Algarve make life very difficult for trees, and so the most common tree species on clifftops and immediately inland from the beaches tends to be the Stone, or Umbrella, Pine (Pinus pinea) which copes very well with the arid and windswept cliff and coastal conditions. It is also a favourite species on golf courses because it is attractive as well as being tough and drought-tolerant. Stone Pine is also cultivated inland in massive plantations for its wonderful crop of pine kernels which are so popular in modern cuisine and baking. As these plantations are vigorously managed and undergrowth kept to a minimum, they tend not to be good places for seeing native plants and flowers.

In early spring no visitor can miss the Acacia (Mimosa) trees which line many roads in the Algarve. Their bright yellow flowers and heady scent provide quite an assault on the senses where they are particularly numerous. The species that provides us with Gum Arabic, still used in the production of confectionary and glues today, is Acacia senegal. The countryside is also dotted with Almond trees, and their beautiful flowers appear in January and February. On old and abandoned farmland, theAlmond trees are frequently interspersed with ancient Olive trees. Olive culture probably began in the Mediterranean Region some 7,000 years ago, and remarkably, some trees are so old that they (or parts of them) may quite literally have been around for up to 2,000 years. Olive production is still an important part of the Algarve economy today. 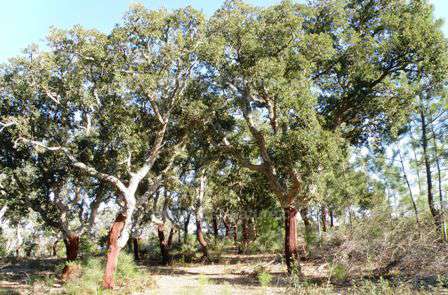 The best type of woodland for the wildlife enthusiast is undoubtedly one of mixed oak and pine, and there are still some good examples of this type of habitat dotted around the Algarve. If the oaks are Cork Oak, the woodland may be managed from time to time when the trees are being stripped of their valuable bark, but the ground is not treated with the herbicides and pesticides which are the scourge of so much of our landscape in northern Europe, and so many native plants are able to survive the management routine and continue to thrive there.

There are some excellent examples of this type of wildlife-rich woodland up towards and around the Monchique area, and also out towards the western Algarve between Vila do Bispo and Odeceixe. It is normally quite easy to access these areas, and unless land is fenced off or clearly being cultivated, it is usually perfectly acceptable to wander through the woods and you are unlikely to be challenged.

In April and May the woodlands are alive with the sound of Cuckoos, and numerous woodpeckers hammer away at the tree trunks in search of the bugs that live there. Other woodland birds include tits, including the Crested Tit, Azure-winged Magpies (which are increasing greatly in number in the Algarve) and warblers. In summer Nightingales can be heard in the woods too.

If not too intensively managed, the understory of many of these lightly wooded areas include cistus species and Strawberry Trees (Arbutus unedo), along with various types of heathers such as white-flowered Portuguese Heath (Erica lusitanica) and pink-flowered Erica multiflora which are both magnificent and covered in blossom in early spring. These woodlands are also filled with early-flowering bulbs which include the lovely Romulea bulbicodium, both One-leaved Squill (Scilla monophyllos) and Two-leaved Squill (Scilla bifolia), Spanish Iris (Iris Xiphium) and, in a few places, the Spanish Bluebell (Hyacynthoides hispanicus). 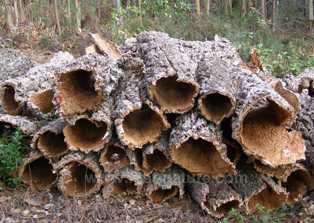 The most common wild orchid species to be found in this habitat is the Broad-leaved Helleborine (Epipactis helleborine), although they can be difficult to spot in the dappled light of the woods. On the edges of the woodland various tongue orchids flower, and they include Long-lipped (Ploughshare) Tongue Orchid (Serapias vomeracea), Small-flowered Tongue Orchid (Serapias parviflora) as well as the magnificent Heart-flowered Tongue Orchid (Serapias cordigera) with its large, blood-red flowers. An exciting find in this type of woodland is the rare orchid Violet Limodore (Limodorum abortivum). The stems of this plant are a striking dark purple as they emerge from the ground in the form of spears, and the flowers (if they open) are also violet. The Latin name of the plant is an indication of the fact that the flowers don't always open, even though the inflorescences may appear above the ground and look as if full flowering is imminent for several weeks. It appears that this flower is capable of self-pollination within the bud in years when the flowers don't actually open.

If the woodland has a stream it can be a good place to observe many insects but especially dragonflies. The Golden-ringed Dragonfly (Cordulegaster boltonii) particularly likes these slight acidic woodland streams for breeding.

In the Walks section of this website we are working on providing a list of places to walk so that you can enjoy the various habitats of the Algarve, and the wonderful wildlife that inhabits them.