At one with nature

The evidence is undeniable - Earth’s biodiversity is in decline. There are, however, exceptions to every generalisation, and, strangest of all, Cernoble is one such. The reason: people, or rather an absence of people.

Unlike other creatures that share our planet, rather than adapt to a location we change it to suit us, naively believing that our view of what constitutes ‘ideal living conditions’ will overcome Mother Nature’s existing plan. Surprisingly our attempts to eradicate undesirable weeds and creepy-crawlies do not result in us living in a biological vacuum - towns and villages bereft of birdsong and buzzing insects, with only the flowers that we choose to plant. 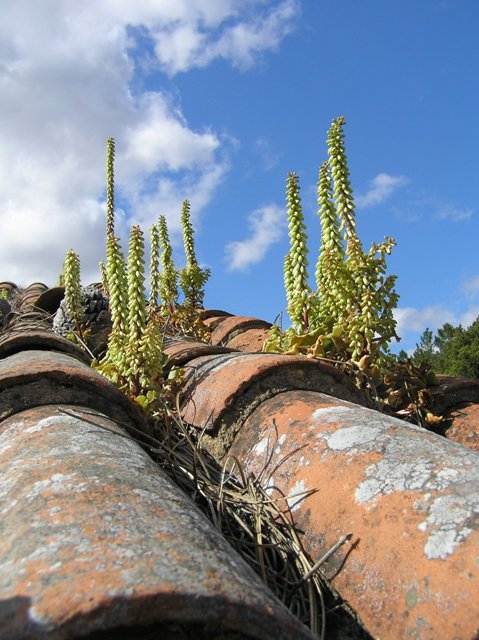 Nature, or rather the nature of Nature, is the reason why. She not only abhors a vacuum but also actively fills any new niche, bringing in plants, fungi and animals either as tourists or as pioneering residents who, when people leave, will in time turn niche to norm – a place not so different biologically from the original habitat: ruins become rural.

Throughout much of Western Europe foxes have become urban urbanities and rural rarities. Smaller creatures with more cryptic lifestyles fill niches as fast as people create them. We may well worry about our own environmentally disastrous wastefulness, but Mother Nature has spent the past four billion years mastering the techniques of reuse and recycling, and all around us, despite our worst efforts, is a richer landscape.

What could look neater than a newly-completed terracotta-tiled roof? Enjoy its pristine perfection while you can, because this monochrome roofscape is destined for early colonisation by lichens. Symbiotic alliances of microscopic algae and fungi, lichens can cope with the heat and drought of bare baked clay, and in turn these crusty lichens are all that is needed for mosses to move in and fill the more shady overlaps. Moss holds yet more moisture, and so tough little annual plants and sometimes perennials too are able to gain a roothold. The roof now offers accommodation for insects, spiders and many other tiny creatures; the niche has become an ecosystem. 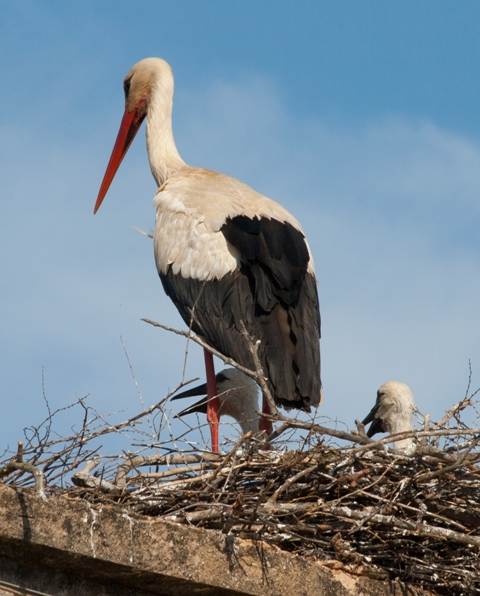 An Algarve icon: White Storks nest on pylons and chimneys – and even in trees if superior accommodation is unavailable.

Moisture-loving plants have a tough time in the Algarve unless they are treated to at least occasional watering by gardeners. Choosing Mediterranean plants and locating them wisely is the key to low-maintenance gardening, but sometimes niches arise that suit thirsty succulents.

Prickly Pear Opuntia ficus-indica is thought to have originated in Mexico. This cactus has been planted as boundary hedging and for its fruits (tunas) in the Algarve and copes well with the long hot summer, storing moisture inside its fleshy paddles. When a paddle is damaged, a niche is created where birds may choose to nest, small nocturnal mammals might rest unseen by day, or drought-intolerant flower seeds germinate and grow. Wounds to plants or to animals are opportunities for colonisation, part of Nature’s reuse and recycling strategy. Life is a terminal disease, but it’s nice to know that there is Life after life... even if it’s not ours.

The colourful bracket fungi that sprout from the roots and trunks of trees do so because fungal spores have found a way into the wood of the tree and have sent out mycelial threads that start their timber recycling work often many years before the tree reaches the end of its life. The bark is there in part at least to make access to the living wood more difficult for fungal invaders, but anyone using a power strimmer around a tree runs the risk of inflicting a wound which may ultimately prove mortal. Fierce winds tearing off large branches are the natural way in which old and weakened trees can succumb to such fungal attacks; strimmers, less selective, of course, the grimmest of grim reapers. 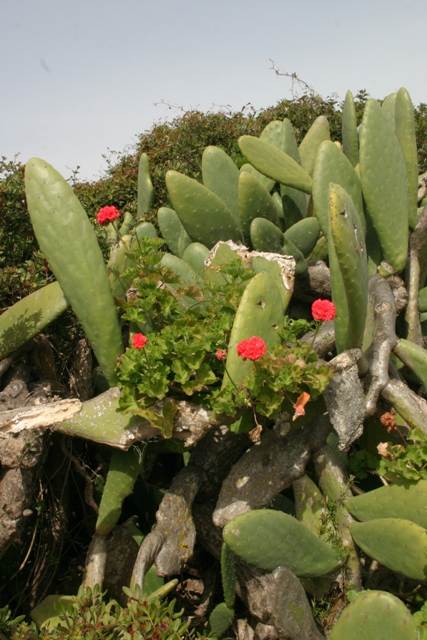 A drought-intolerant pelargonium finds all the moisture it needs in the broken blade of a Prickly Pear.

New niches are not the exclusive domain of the destroyer; construction also feeds the recycling process. The wealthy may upgrade their homes, replacing faded fixtures and fittings, refitting facades to follow Fashion, but even the most humble of human abodes demands a programme of repair and renewal, as other life forms move in uninvited and take a consuming interest in structural timbers, rendering and plaster. Only when mould or mushrooms emerge do we realise that the moss on the roof conceals a cracked tile which is letting water, the elixir of life, through to ceilings, walls or floors and writing in big bold letters, ‘Vacancies: All Welcome.’

We cannot expect Cernoble’s 2,600 km2 (1,000 square miles) ‘Zone of Alienation’ - estimated to remain inhospitable to human life for at least 20,000 years - to compensate for all of mankind’s pressure on natural habitats. If we can only learn to live with rather than fight against Nature, our own temporary niche should remain viable for longer.