At One with Nature -
Natural beauty is in the eye of the beholder, says Sue Parker

Imagine a place bathed in glorious sunshine where the only sounds are melodious birdsong and the buzzing of brightly coloured insects as they flit between blooms in a wildflower meadow that stretches towards the horizon. There’s a tranquil stream, too, where fish rise in the crystal waters to seize their share of insects as they emerge from the riverbed and dry their wings on the surface before setting out on their final adventure: to mate and then return to lay eggs that will replenish the river’s insect population.

Suddenly a voice booms from beside me, ‘Seen any wildlife?’

‘Oh yes,’ I reply. ‘The wildflowers, birds and insects are just wonderful here...’

I am met by a look of blank amazement! ‘The what?’

Where was I? From the description it could well have been the Algarve. But no, it was Yellowstone National Park in Wyoming USA, and what the questioner meant to say was, ‘Have you seen any bison, bears or other big beasties?’ To many people that’s what wildlife means: creatures big enough to be unmissable, easy to identify and preferably high on the scariness scale. 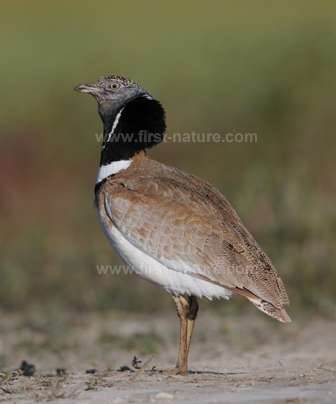 A Little Bustard,  a star of the Algarve’s wonderful wildlife.  Picture: Ray Tipper...

True, huge mammals do roam the national parks high in America’s Rocky Mountains, and visitors stand a good chance of catching sight of some of these remarkable animals. But here in the Algarve we also have great places with iconic wildlife – for example areas that are brilliant for birds.

To see the Algarve’s Great Bustards and Little Bustards you would visit a paradise very much like that described above. It’s where they live: vast open grasslands which in spring are smothered in wildflowers and teeming with insect life. 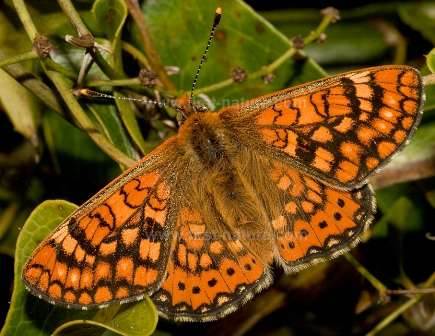 The Marsh Fritillary Butterfly – the plantlife of the Algarve is essential for its survival. Picture: Rob Petley-Jones

But what happens if the bustards (or the bison or bears for that matter) don’t show up? It happens. Wild animals and plants are unreliable; they move around without consulting a calendar. The weather can bring forward or set back the appearance of a particular species by several weeks and sometimes months. People often spend large amounts of money on wildlife trips and safaris to see particular plants, birds or other creatures, and some will declare their trips disappointing failures because the desired flower was ‘over’ or a particular animal - the one thing they set out to see - did not turn up to order.

I have yet to see a bustard in the Algarve. I have been in the right place at the wrong time (and no doubt vice versa) on numerous occasions and failed comprehensively on every trip. Maybe next spring… And yet none of those visits was wasted: there was always something of interest, something I had never seen before – or a superb specimen of a flower, a butterfly, a fungus that was so much finer than any I had seen before and whose photograph will take pride of place on a web page just as soon as I can get around to it.

The natural world is infinitely rewarding to those who broaden their interests and remember to look down as well as up (and where they are going) during their countryside rambles. Knowing which plants a particular animal feeds on and being able to identify them can be very helpful in getting you to the right place at the right time to see mammals. I shall never forget this, having been charged by a huge male Elk Deer while I was on my knees photographing and puzzling over the identity of a plant whose common name turned out to be… Elk Weed!

Knowing when we have found the larval food plant of a particular rare butterfly increases our chances of finding the butterfly, just as knowing what a teasel looks like helps us to find Goldfinches: they just love teasel seeds. Broadening our wildlife horizons ensures that our trips to visit the wonderful Algarve countryside are never failures. 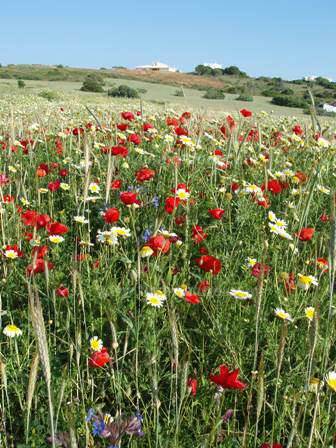 A wildflower meadow – a vital ecosystem element that other Algarve wildlife depends upon.

That latter-day mammal hunter in Yellowstone National Park simply didn’t see flowers and insects; they were literally beneath his notice. His exclusive view of wildlife blinded him to the fact that large mammals are just part of an ecosystem. Those networks of interdependent plants, fungi, birds and bugs and the habitats that support them are the reason that the bustards and the bears are where they are. Maybe in the eye of that particular beholder a bee isn’t nearly as beautiful as a bear, but without the bee where would the bear be, and where would it get the honey it craves?

Ray Tipper is co-author of Algarve Wildlife – the natural year, and can be contacted via: ray-tipper@algarvewildlife.com