The Mediterranean isn’t just a sea or a region, it’s also a biome - an area defined by its climate and the communities of plants and animals that live there. Other kinds of biomes include deserts and rainforests. The Mediterranean biome has outposts in California’s Chaparral, central Chile’s Matorral, the western Cape of South Africa’s Fynbos, and the Mallee regions of Southern Australia - all areas which, although far away, share our climatic conditions. Southern Europe has the best of it, though, with two thirds of the biome lying around the basin of the Mediterranean Sea. Although not strictly Mediterranean - the Algarve has the Atlantic lapping its shores - we are close enough to share the mild wet winters and hot dry summers that typify Mediterranean climate zones. 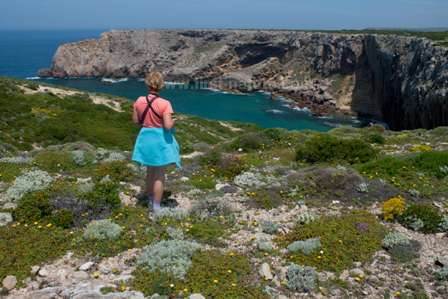 Why is this so important? Although covering only two per cent of the earth’s land surface the Mediterranean biome is home to an astonishing 20 per cent of the planet’s botanical species. Algarve gardeners may feel that with the interloper Bermuda Buttercup we have one too many, but wildlife tourists (so crucial to our economy) are well aware that numerous botanical gems grow right here on our doorsteps. 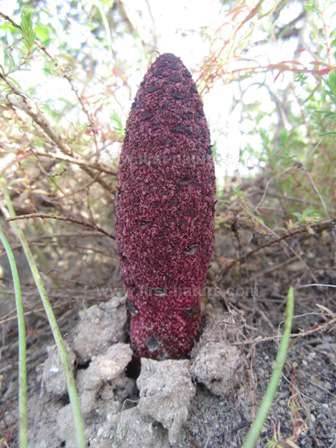 Maltese Fungus  Cynomorium coccineum is a very rare and poorly understood plant. Coastal developments on the Algarve could soon force this plant into extinction in the area. Picture: Chris Thorogood

A magnet for the botanically minded, Cape St. Vincent attracts visitors from all over the world. Chris Thorogood, co-author of Field Guide to the Wildflower of the Algarve  regards the area as one of the most rewarding for spring excursions to see Mediterranean wildflowers in general and Iberian Peninsula endemics in particular. 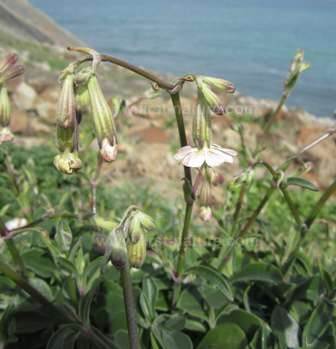 Silene rothmaleri occurs in the Algarve and nowhere else. Originally discovered by German botanist Werner Rothmaler in 1945, this wildflower was thought to have become extinct until, in 2000, it was officially ‘rediscovered’. In fact, it had already been spotted by Oxford students who were researching the botany of the area; their successors know of at least three locations where the plants are still thriving. As these locations are on dangerous shaley cliffs, I am happy to take their word for it! 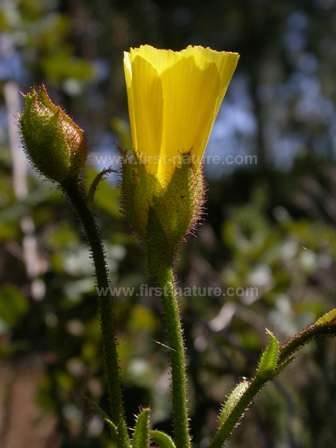 Portuguese Sundew Drosophyllum lusitanicum -  collected to the point of extinction, there is now an ongoing programme to conserve it. Picture: Ron Porley

Also at Cape St. Vincent you can see Algarve Toadflax Linaria algarviana, a tiny snapdragon so rare that it is on the International Union for the Conservation of Nature (IUCN) Red List of Threatened Species. Beside the road running from Sagres to the lighthouse at Cape St. Vincent, look out for Astragalus tragacantha subsp. vicentinus, an intriguing white-flowered shrub described as ‘resembling a reclining sheep’, and the rather less conspicuous Shrubby Violet Viola arborescens. 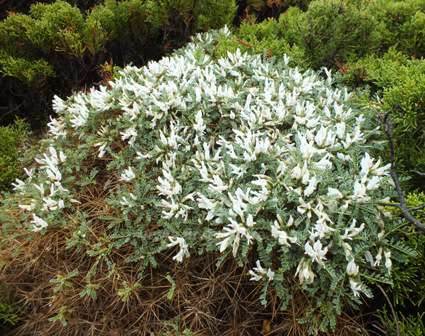 The Algarve’s rare plants are not confined to Cape St. Vincent. The cliffs near Alvor are home to a real oddity, Cynomorium coccineum. Much more reminiscent of a fungus than a plant (and indeed sometimes referred to as Maltese Fungus), this parasite erupts from the soil as a club-shaped column of tiny, densely-packed dark-red flowers. Little is known about this strange plant, which is in danger of becoming extinct due to erosion of its habitat by tourism developments. 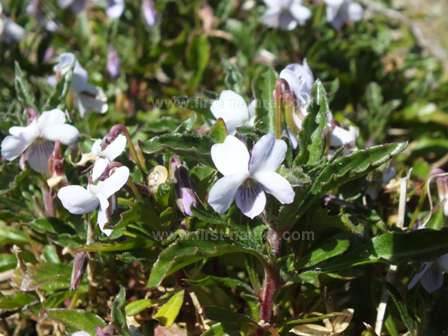 Also in serious decline, but in this instance due to the excesses of unscrupulous collectors, is the Portuguese Sundew Drosophyllum lusitanicum. This carnivorous plant, with its pretty bright-yellow flowers, has slender stems coated with red-tipped hairs. The hairs exude a sticky substance that traps tiny insects; the more the insects struggle the more ensnared they become until eventually they die of exhaustion. The sundew then produces enzymes which dissolve the insects so that their nutrients can be absorbed to supplement the plant’s diet. So rare has Portuguese Sundew become that it is now the subject of conservation efforts to propagate it well away from traditional strongholds known to those collectors who have driven it almost to extinction.

Up in the mountains there is a spurge endemic to the hill forests of southern Portugal, Euphorbia monchiquensis, treated by authorities as a distinct member of the E. paniculata complex. This majestic-looking plant grows to a metre in height and decorates the verges of roads that weave their way up into the hills. The woodlands in the mountains are also home to dwindling numbers of peonies Paeonia broteroi, which is one of the plants most sought-after by visitors on botanical trips to our region.

A startling find for visitors from Northern Europe is the Brown Bluebell Dipcadi serotinum. Although they are widespread and quite common in the Algarve, you have to search diligently for these lovely wildflowers, which blend so well with their orange-brown surroundings . Of course , for many British visitors nothing can rival the sight of their own famous bluebell woods in springtime.

The Spanish Bluebell Hyacynthoides hispanica, which does occur in the Algarve, is but a poor substitute, and so from a novelty point of view it is much more fun to seek, find and marvel at our beautiful brown ones. From February to early April Dipcadi serotinum is common at Cape St. Vincent, but you can also find colonies on dry stony ground elsewhere in the Algarve including the high hills around Monchique. 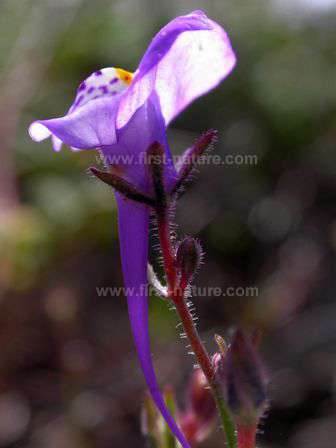 Blooming at the same time as the Brown Bluebell, Fritillaria lusitanica favours dense thickets of uncomfortably prickly plants such as gorse and wild thyme, but the beauty of its chequered dusky purple flowers more than compensates for any scratches incurred while taking photographs. These lovely fritillaries can be found right across the Algarve, but they are particularly plentiful at Cape St. Vincent in the west and at Ria Formosa Nature Reserve in the east.

Not all of the Algarve plants we so love are rare. Travelling around the region in springtime we are frequently treated to the dazzling sight of a wonderful wildflower meadow. The flowers may still be common, but the meadows they grow in are under serious threat from development, and their numbers diminish year by year. It is so easy to think of the wildflowers that pop up everywhere around us as weeds - tenacious things that are virtually indestructible - but the sad truth is that if we lose too many of the places where they can grow and set seed these common plants will become the rarities of tomorrow, demanding of another article like this one. 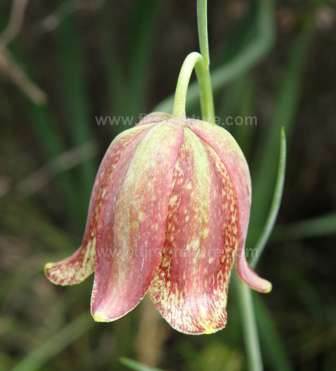 The lovely chequered flower of Fritillaria lusitanica. Widespread in the Algarve but hard to spot in its chosen habitat of prickly shrubs.

In my office are two very old and treasured flower books. Common Wild Flowers, by John Hutchinson, was published in 1945 - the year that Silene Rothmaleri was discovered. Five years later that same renowned English botanist published another book entitled Uncommon Wild Flowers. How shocked would Mr Hutchinson be to discover that little more than half a century later many of the flowers in the first book would now need to be moved to the second? 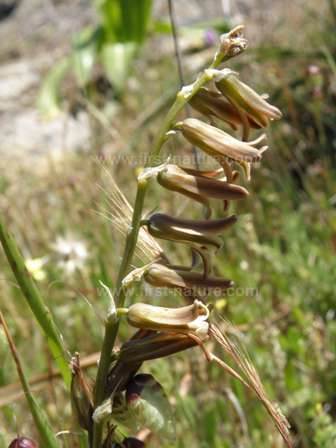 Brown Bluebells Dipcadi serotinum are common throughout the Algarve but are often overlooked because they blend in so well with their surroundings.

Sue Parker is a Director of First Nature, Publisher of Algarve Wildlife – the natural year; Wildflowers in the Algarve; and Wild Orchids of the Algarve – how, when and where to find them.