At One with Nature - Parasite Lost? - Sue Parker learns a lesson from a Limodore

On 27th September this year a United Nations specialist panel published its report into the causes of Climate Change, concluding that ‘it is 95% certain’ that the activities of mankind are the main cause of global warming. Some may continue to dispute this, but there is plenty of other evidence that our unsustainable exploitation of Earth’s resources will lead to disaster sooner rather than later: declining fish stocks, soil erosion, concerns about energy security… let’s not go there. 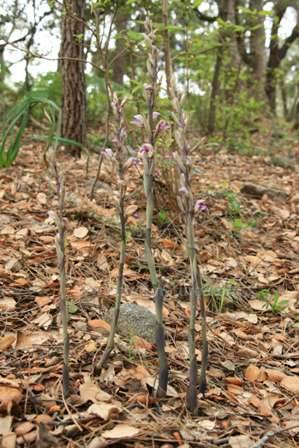 The Violet Limodore in its classic woodland setting

One of the most compelling pieces of evidence is the accelerating rate at which we are now losing wildlife species. If unchecked, this might escalate into a disaster to rival the Cretaceous mass extinction of 65 million years ago, when about 75% of the planet’s species, including the dinosaurs, were wiped out. Whether it was caused by an asteroid colliding with Earth or by a violent bout of volcanism, the skies would have been clouded with debris blanketing out most of the sun's energy, strangling photosynthesis and so imposing starvation throughout the food chain. Outpaced by the rapid rate of environmental change, plants and animals unable to adapt or evolve became extinct.

Like certain other creatures, we exploit the planet’s resources but contribute little in return. You know what happens: once the host is drained of its lifeblood, it dies - and so does the parasite unless it can move on quickly to another host. Such a move requires a Plan B, a rapid and profound change in modus operandi; but Evolution is not a speedy servant, and so few creatures possess this flexibility.

Our own present situation is even worse. As the saying goes, ‘There is no Planet B’. We don’t have the option of switching to an alternative host if we exhaust our current one. So what are we to do? Perhaps we can learn some lessons from other parasites in the natural world; they feed off their host but stop short of destroying it.

To illustrate this point I have chosen one of the Algarve’s most beautiful wild orchids, the Violet Limodore Limadorum abortivum. The repertoire of self-preservation mechanisms that Evolution has placed at this orchid’s disposal parallel some of the moral dilemmas that we face today.

Over several million years of evolution the orchid family (Orchidaceae) has attained a remarkable level of reproductive sophistication, ensuring the progressive evolution of species. Adapting to Nature’s periodic changes in climatic conditions, some 25,000 orchid species share our planet today. Similarly, most of the Hominids – our own biological family - have also survived Nature’s periodic mood swings. But is the past a guide to the future? 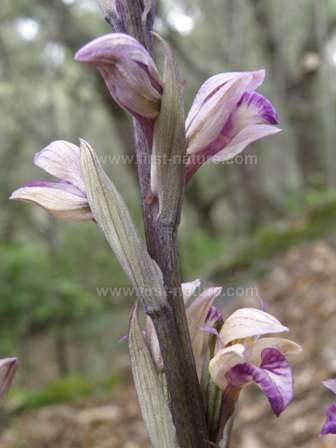 Past the point of no return, these flowers will not abort

The Violet Limodore lives in woodland, and in the Algarve it shows a marked preference for forests of Cork Oaks and pines. Both elusive and enigmatic, this lovely wildflower simply disappears if the conditions don’t suit it - during periods of drought, for instance, or if the other vegetation with which it would have to compete on the woodland floor becomes too dense. Much of its biology remains a mystery. Although Violet Limodores contain some chlorophyll (evident from their slightly greenish stems) and are therefore able to synthesise some food from sunlight, throughout their lives these plants are dependent on a relationship with fungi that themselves reply upon the surrounding trees to supply them with vital nutrients.

Resembling a purple asparagus spear up to 80cm tall, the Violet Limodore’s flower spike emerges from the ground in March. Surprisingly, after all that effort, the flowers sometimes fail to open - hence its scientific name abortivum. We don’t know why this is; it may be a reaction to adverse conditions. The gorgeous flowers are pollinated by insects in years when they do open, but what happens when they don’t? This versatile orchid is capable of self pollination within its closed flower buds. More amazingly it can even self pollinate and produce seeds below the ground, and so some years it doesn’t venture out at all.

Self pollination is, in effect, cloning. Nowadays we are able to clone mammals too; but even though it is a fairly common and natural process in the plant world, it seems the general public is not ready to accept this as a strategy for our own survival. Not yet… 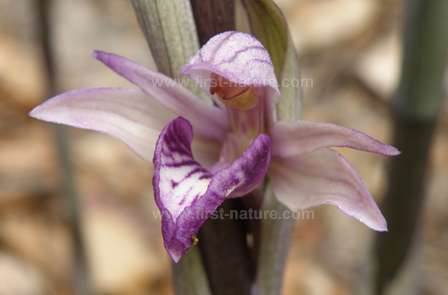 The exquisite flower of the Violet Limodore

Like most other life forms, the Violet Limodore has a long history of steady adaptation to changes visited upon it by the Planet. Now, the boot is on the other foot - the Planet is reacting to violent upheaval heaped upon it by us. Since the start of the Industrial Revolution a mere 250 years ago, we seem to have become the rudderless and increasingly powerful engine of change. In one generation our impact has been profound. Evolution cannot possibly keep up. Together with wild orchids and all wildlife, we are now in uncharted territory.