Nearly 70 years ago, when John Wyndham was writing perhaps his most obscure sci-fi novel, he penned these words: "In a century or so, we shall be in the Age of Famines. We shall manage to postpone the worst one way and another, but postponement isn't solution, and when the breakdown comes there'll be something so ghastly that the hydrogen-bomb will seem humane by comparison ... we shall starve in our millions, in the blackest of all dark ages." 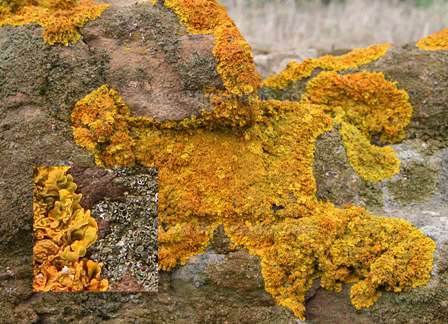 Communities of lichen live on an old stone wall in the Algarve.  Inset a close-up view of the boundary between two lichens

Wyndham was not alone in foreseeing a world overpopulated by starving people, but the twist in his tale was the (fictional) discovery of a rare living organism, a kind of lichen, that could extend the human lifespan to between 200 and 300 years. Try saving for that kind of old age pension! The book was entitled Trouble with Lichen, and in case you haven’t read it I won’t spoil the plot.

Reflecting on the problems of feeding and caring for so many people on our tiny planet, I find Wyndham’s foresight humbling. We could indeed have trouble with lichen; but, I wonder, how much more trouble might we be in without those remarkably supportive communal lichens that we all see but hardly notice. 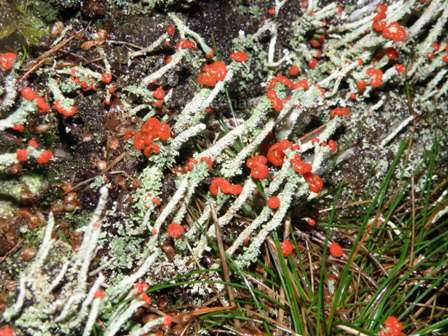 The aptly-named Matchstick lichen is tiny but hard to miss

Lichens - more formally referred to as ‘lichenised fungi’ - are not single species but communities usually comprising a fungus and an alga living together, providing one another with food and shelter often in hostile environments that neither organism could survive on its own. Most lichens bear little resemblance to either of their fungus or alga constituents. Some lichens look like thin crusts of old paint; others resemble curled leaves or matted curly hair; a few stand up like tiny green chalices or red-tipped matchsticks. Most lichens have one thing in common: they are extremely sensitive barometers of environmental pollution – the outdoor equivalent of the miner’s canary. Trouble with lichen, Mr Wyndham? We would be in trouble without them, and for more reasons than one.

Down the centuries mankind has made use of lichens in many ways – as food for animals and sometimes for people too; as sources of colourful natural dyes; as stabilisers in the manufacture of perfumes. The so-called litmus test, used to assess acidity or alkalinity, relies on a dye extracted from the lichen Rocella tinctoria. Knowing the growth rate of crust lichens has enabled archaeologists to date ancient man-made structures. And where would model railway enthusiasts be without their trackside miniature trees and bushes made from wiry grey-green lichens?

Amid warnings that routine operations could become deadly within 20 years if we lose the ability to fight infections, it is worrying to learn that we had not found a new class of antibiotics since the late 1980s… until this year, when researchers in America extracted a new and unusual antibiotic compound from a marine microorganism. Called anthracimycin, it might, for a time at least, be effective against MRSA and anthrax.

But the bugs bite back, evolving new strains capable of sharing antibiotic-resistant genes. These so-called superbugs have developed ways of resisting our most powerful antibiotics. Bacteria have time on their side; we do not… but we do have lichens.

Historically, most of the world's medicine was derived from plants and fungi. Salicylic acid, the active ingredient in aspirin, is found in willows (the genus Salix). Penicillin, of course, is  derived from fungi. As an eminent mycologist told me recently, if you need an organ transplant  there is only one chemical that's used to suppress rejection. Where did it come from? A fungus.

Tree lungwort, a green leaf-like lichenised fungus that grows on tree trunks in dark damp woodland, has already been found to contain properties that could fight CJD, the human form of mad cow disease. Pharmaceutical study of lichenised fungi has barely begun, but many scientists believe that among the world’s thousands of lichens we could find the key to major medical breakthroughs. 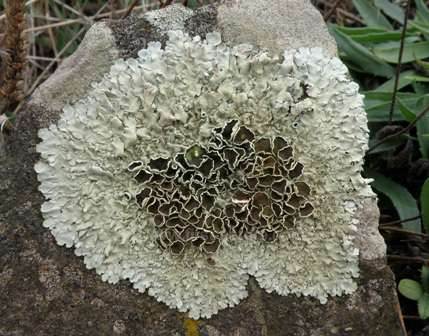 What lichens need is clean air: pollution kills them. Here in the Algarve we see lots of lichenised fungi because they like our clean fresh air, and with their communal lifestyle they can cope with our harsh summer climate better than almost any other living creature.

So next time we come across Spanish Moss lichen festooned over on an old Cork Oak, or a bright orange patch of Xanthoria lichen obscuring the legend on a gravestone, maybe we should look on it not as a problem – trouble with lichen - but as a potential opportunity.

I rather like the idea that somewhere in the Algarve there is a lichen on riverside rock or a hillside tree that could provide us with the next big breakthrough in the fight against cancer or MRSA.

Sue Parker is a Director of First Nature, Publisher of Algarve Wildlife – the natural year;  Wildflowers in the Algarve; and Wild Orchids in the Algarve.