Tiddlywinks… so That’s Their Little Game!

Sue Parker meets some down-to-earth stars of the forest and learns what makes nest eggs grow.

It was C S Lewis who famously said, “It may be hard for an egg to turn into a bird: it would be a jolly sight harder for it to learn to fly while remaining an egg.” In effect he implied that while birds may learn to fly, eggs cannot. That’s not hard to believe… until you see your first flying egg.

In the high serra of the northern Algarve, where forestry work is a continual process of fell and replant, fell and replant, the challenge of disposing of huge piles of damp sawdust and wood chippings provides food for thought. There is not much that gardener’s can do with eucalyptus sawdust, which being high in carbon and very low in nitrogen tends to inhibit plant growth, but this waste product is manna from heaven for certain rotters, known collectively as the nidulariacea. 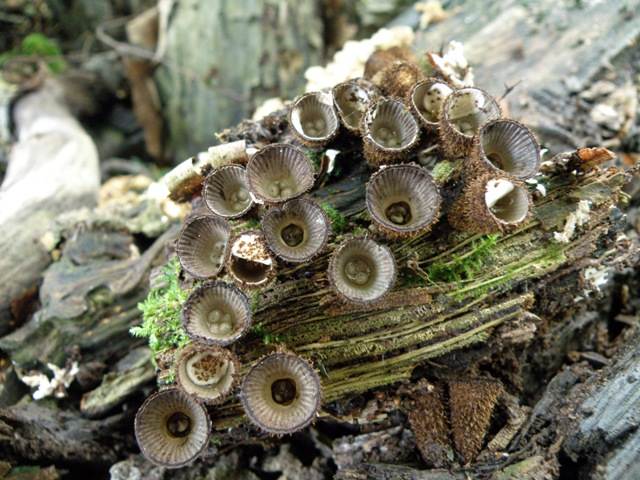 Latin scholars will have spotted the link. Nidulus means little nest, and birds are not the sole custodians of these clandestine nursery schools. A tribe of relatives of the supermarket button mushroom has devised an ingenious reproductive process that involves the next generation flying out of the nest while still inside their eggs. No, honestly!

Bird’s Nest fungi live as networks of microscopic thread-like material inside damp rotting wood. When they come towards the end of their meal and the weather conditions are right – warm and wet, ideally – tiny lumps of fungal material burst through the surface and grow into hollow conical structures sealed with lids. Inside these nests, which are less than 1cm across, tiny white ‘eggs’ develop. Fluted Bird’s Nest Cyathus striatus produces four or five eggs per nest, while Common Bird’s Nest Crucibulum laeve can have ten or more. 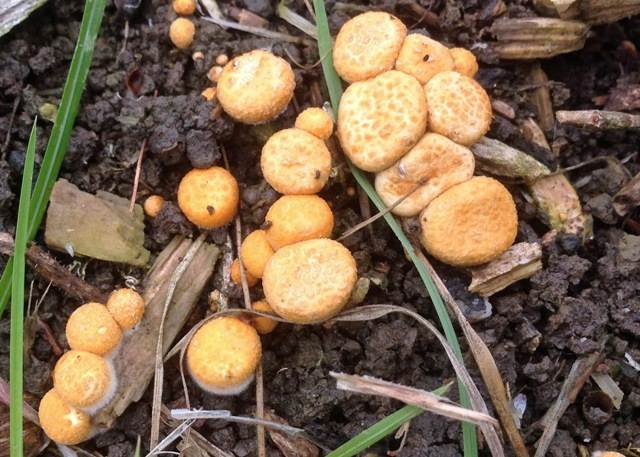 In an 1888 patent application Joseph Assheton Fincher claimed to have invented the game of Tiddlywinks, but in fact Bird’s Nest fungi had beaten him to it by many millions of years. They can even play it backwards, and here’s how… When the fungal spores that develop inside the eggs are ripe and raring to go about their reproductory business, the lid splits from the top of the nest and blows away, leaving the eggs exposed. Raindrops then play tiddlywinks with the eggs, flipping them out of the nest and onto nearby woody debris which, if not already home to the Bird’s Nest fungus, becomes its next colonial conquest.

As these curious fungi munch their way through the debris left by tree fellers and, of course, trees that die and fall naturally, so they recycle cellulose, lignin and the wood’s other complex compounds, turning them into simpler soil components that living plants can use. Mighty oaks that reach up towards the stars soon consume the sparse nutrients in the soil beneath their canopy, but fortunately other down-to-earth stars come out and help to top up the sylvan soup kitchens.

Astraeus hygrometricus is commonly referred to as the Barometer Earthstar. It grows on earth, and it looks like a star fallen from the skies. The barometer reference should really be ‘hygrometer’ and if you sit and watch these strange little fungi as they dry out after a shower you soon learn why.

Each fungal fruitbody comprises a roundish ball of spore-producing material encased in a two-layer skin. The outer skin or exoperidium splits to form typically eight pointed rays – like the rays of a star as depicted in children’s story books and on Christmas cards. The rays fold inwards and protect the inner spore sac during dry weather, and they open outwards during wet weather so that raindrops can fall upon the spore sac. Once the spores are fully mature the spore sac splits at the top, so that each time the sac is compressed by a raindrop a puff of spores is ejected and carried away by wind and water. That’s how these and the various other kinds of earthstars colonise new territory. 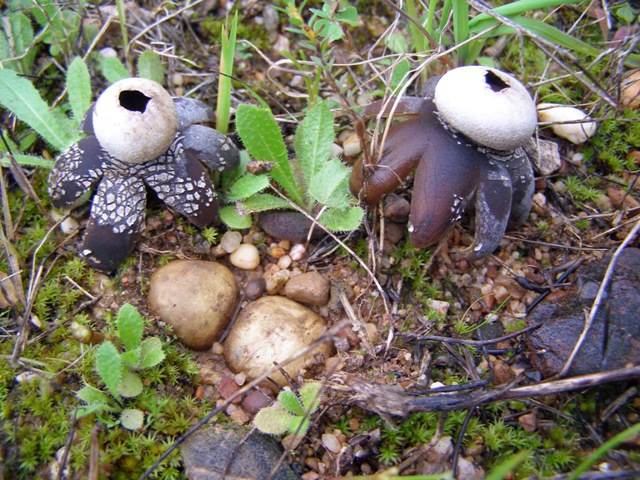 Barometer Earthstars work just as well underground. Their microscopic fungal threads, called hyphae, scour the soil for moisture and other vital nutrients which, via connections to the rootlets of trees, they share with their partners in the plant kingdom. It’s another example of symbiosis, and in many instances several kinds of plants, including trees, are linked with a number of different kinds of fungi in relationships the complexity of which is beyond comprehension. Roles may change during the life of a plant, so that what was a mutually beneficial relationship turns parasitic until either a plant or a fungus is killed, whereupon others in the relationship put on a spurt of growth stimulated by having a former friend for dinner. Eat your heart out Hannibal Lecter… but not mine, please!