The Sea Cow, a relative of the Manatee, was only discovered in 1741, but by 1768 it had been hunted to extinction. A similar fate befell the Great Auk. Mammals, birds and other large animals don’t have big families, and so they are particularly vulnerable to over exploitation.

Plants tend to cope rather better, but even so their survival ultimately depends on flowers producing seeds that fall to the ground and germinate. Pick a flower in its prime and the seeds cannot develop. Rare species endemic to small areas are therefore particularly at risk. The red-flowered St Helena Olive, Nesiota elliptica, was endemic to the island of St Helena in the South Atlantic. When the island was stripped of its  timber (since replaced by other plantations) the St Helena Olive declined rapidly, becoming extinct in the wild in 1994. Nine years later the last known specimen in cultivation died. Other than in pictures, this pretty flowering plant will never be seen again. 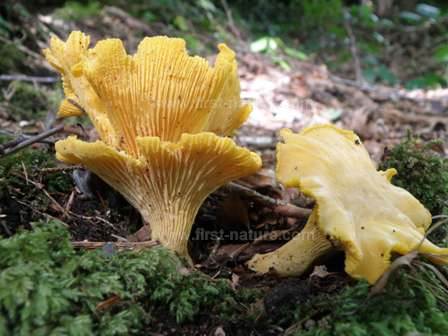 Above - Chanterelles Cantharellus cibarius are common in the Algarve and are very good to eat.

In evolutionary terms closer to animals than to plants, fungi are nevertheless equipped with amazingly robust survival gear. Take a typical chunky mushroom – a Cep, for example; whereas a flowering plant might generate a few dozen to a few thousand seeds in its lifetime, a large mushroom can produce many billions of spores – the dust-like reproductive material from which new mushroom colonies arise. The very act of picking a mature mushroom releases into the air millions of spores, which can travel vast distances – sometimes several thousand miles - on the lightest of air currents, effortlessly crossing oceans and showing no regard for national or continental boundaries. 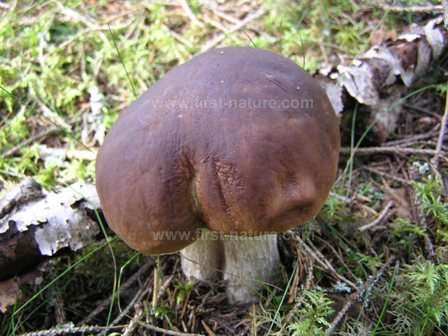 The Cep Boletus edulis is arguably the finest edible mushroom found in Europe.

In any case, fungi have another cunning trick up their many long, thin sleeves. Under the ground or inside the timber upon which we find the mushrooms and toadstools there lives an unseen organism, the essence of the fungus, called mycelium. If you pick up a compressed layer of dead leaves from a damp, shady spot in winter you will see fine white strands that branch frost-like between leaf layers. These are bunches of ultra-fine threads that make up a network of mycelium. Mushrooms pop up briefly from the hidden mycelium with the single purpose of producing spores. Although their mushrooms soon die and decay, the mycelium of many kinds of fungi can live for tens, hundreds or even thousands of years, and they do so regardless of whether the mushrooms are picked.

Doesn’t all this suggest that fungi are virtually indestructible and that the future of a mushroom species is not going to be threatened by picking as many as we can find? It sounds like really good news for fungi foragers, but may I raise a note of caution…

The natural world is much more interconnected than ever we thought. Many of the woodland fungi are quite incapable of feeding themselves: they rely on trees or shrubs to supply them with the energy-rich sugars necessary for their mycelium to grow and produce mushrooms. The trees and shrubs in turn depend on their fungal friends to scour the surrounding soil and deliver, via the plants’ root systems, water and vital nutrients such as phosphorus - rather as many of the plants ultimately depend on insects for their pollination. 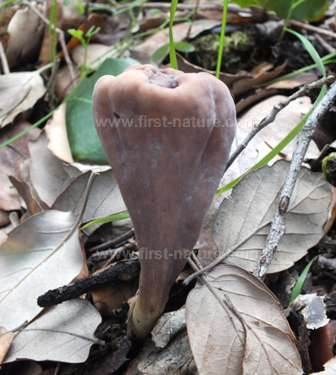 What happens to mushrooms if we don’t pick them? They are rarely wasted: all sorts of wildlife from squirrels to snails, foxes to flies feed on fungal fruitbodies. Some of these creatures rely exclusively on particular kinds of fungi. Particularly in dry years when fungi are scarce, picking too many of a species in one place could mean condemning some poor creature to starvation and maybe even to local extinction. If that creature is crucial to the survival of one or more other species in an ecosystem then there may be knock-on effects. I continually remind myself that we are part of the various ecosystems around us, and that right now we have very little understanding of our own dependence on other creatures, plants, fungi etc with which we share the planet.

If the Great Auk had been better at breeding to keep up with increased exploitation, and if the St Helen’s Olive could have thrived without fungal support from its ecosystem, then maybe I would not have begun wondering whether to moderate my mushroom gathering. Although the world usually notices when yet another large bird or mammal population plunges towards extinction (although not often in time to prevent its demise), the loss of tiny creatures dependent on fungi is almost certain to go unnoticed… until we discover what other vital roles they used to play in ecosystems on which we are dependent. Although the Algarve is fabulously blessed with fungi, mushrooming in moderation; that’s my maxim!