Nobody likes putting their foot in it, but we can't just turn a blind eye and seethe in silence, says Sue Parker.

For the January article I like to write something optimistic about the beauty of the burgeoning spring and the wildlife wonders that await us in the Algarve once the sunshine lengthens and strengthens.  However, last autumn I saw something so dreadful in our countryside that I have decided to break with tradition, write about this ‘blot on the landscape’ and to appeal for a collective New Year’s Resolution to help stop this blight.

As a former campervan owner I have always been pretty relaxed about other owners over-nighting in some out-of-the-way spots as long as they behave in a responsible manner.  For security reasons I have never been particularly keen on the idea myself, preferring to stay on official sites.  Last autumn I took a walk through the sand dunes at Carrapteira, one of my favourite spots for finding fungi and other interesting things to photograph and to learn about.  As always, there were campervans in the car park, but what I was not prepared for was the hideous sight just behind some shrubs of what is clearly an open toilet for some campervan residents.  A large area of sand was covered in human excrement with accompanying toilet paper.  I have since been told by one of my Portuguese friends who accompanies visitors on walks that she is now encountering the same horrific sights in the countryside on a regular basis. 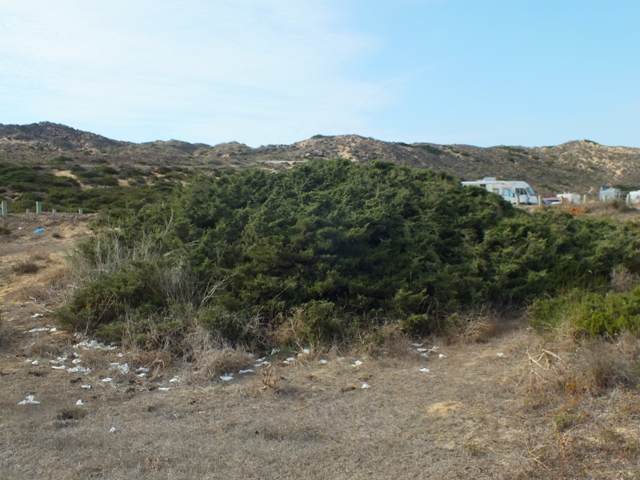 Human excrement and toilet paper in the sand dunes at Carrapateira

It is bad enough having to live with fly tipping, dog muck and picnic and domestic litter scattered throughout some of our most iconic wildlife sites, but this must be the limit.  Words fail me when I try to describe the utter selfishness of the people who perpetrate this kind of act, but there is a much more serious aspect to this than their total disregard and respect for the environment: public health.  It is only a matter of time before a child playing in the dunes becomes ill.  What will that do for the reputation of the Algarve as a tourist destination?

Usually when people despoil the landscape it is to avoid costs (fly tipping circumvents landfill charges) or inconvenience (carrying dog-poop bags and disposing of them properly takes time and effort). Most modern campervans are fitted with chemical toilets, and there are plenty of places throughout the Algarve where they can be emptied properly.  Recently there have been  generous offers by many restaurant/cafe businesses in the countryside to allow campervans to park in their car parks and use their facilities, and yet still these people abuse the Algarve’s hospitality in the most vile and callous way. Clearly not all campervan owners behave in this way, but they will be tarred with the same brush and should, for that reason, help to stamp out the bad behaviour of some of their neighbours.  What the abusers are doing is not just antisocial; it is illegal. 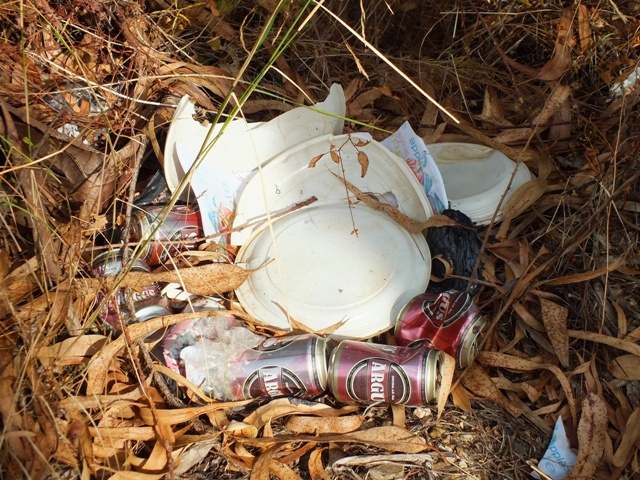 An article in Algarve Resident October 6th 2016 described a new investment of €1.5 million in a ‘winter’ culture plan for the Algarve aimed at making the region an all-year-round destination rather than simply a summer holiday venue.  This follows on from a concerted effort by government in recent years to promote wildlife tourism, which also brings badly needed tourists to sustain businesses during the ‘off’ season.  The latter has been successful and there is now better signage to some of the Algarve’s most beautiful sites and better facilities when you get to them. These inland town and country areas have so much to offer tourists and represent huge potential for sustainable development, and yet they are often the most abused by fly-tippers and those who daub every available wall with ugly graffiti – out of site of those who are paid to ‘manicure’ the coastal resorts, and out of the minds of the rest of us.
Would the government be better, then, to spend the €1.5 million on a major clean-up?  The situation is now so dire that €1.5 million would not even scratch the surface of cleaning up our mess.  And in any case it would require an army of litter pickers just to deal with the non-toxic waste that has been strewn across the countryside. 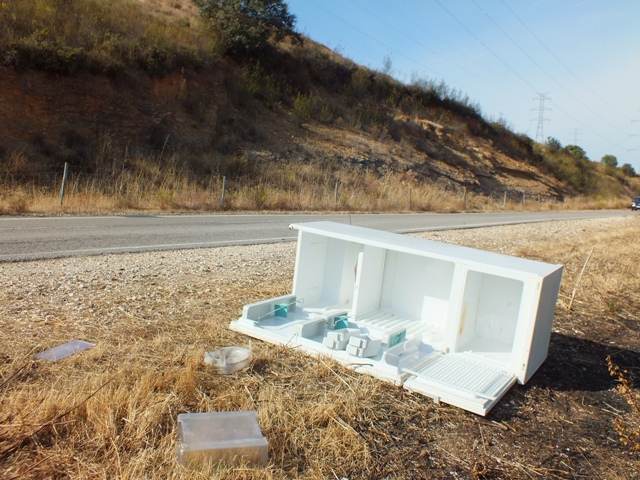 This freezer was dumped on the road a few yards from the entrance of one of our top tourist attractions near Silves.

A small army already exists – volunteers who give up a few hours here and there to don gloves and fill a bin bag or two on a country walk.  My New Year resolution is to join up, join in and become part of the solution rather than merely bemoaning the problem and placing all the onus on cash-strapped local,  regional and national government.  Let’s make a collective New Year’s resolution to eradicate this awful scourge from the Algarve.
This in no way absolves government from its duty to protect the environment. It cannot turn a blind eye to the selfish behaviour of those responsible for the litter that ruins our countryside, damages the reputation of the Algarve, and blackens the future that young Algarvians and future visitors to the region expect and deserve. Education is not the answer: environmental criminals know they are acting illegally. Government’s duty is rigorous enforcement of the law.

The wonderful environment of the Algarve is our children’s heritage – let’s stop trashing it!
All suggestions are welcomed... please send them to us at Algarve Resident.