The brilliant flash of light as a Swallowtail butterfly flutters by could have been – maybe should have been – the inspiration that changed low-energy light bulbs from inferior substitutes for filament lamps into neat, reliable must-have products. It was not so, however.

When in 1907 Henry Round discovered that radio-signal detector crystals (so-called ‘cat’s whisker diodes made from crystals of lead sulphide and used in pioneering crystal-set radios) emitted a tiny amount of light when fed with an electric current, its significance went largely unnoticed. More than half a century passed before this phenomenon, known as electroluminescence, was put to use in red light-emitting diode (LED) displays in digital watches, pocket calculators and the like. Gradually other colours became available, making LED traffic lights and colour display screens feasible. For domestic lighting white light is needed, and we had to wait until 1995 for that breakthrough. But there was still a major problem. Although LEDs converted electricity to light far more efficiently than filament bulbs ever could, most of the generated light rays bounced back and forth, trapped inside the crystalline structure of the LED: they never saw the light of day (or should that be vice versa?) 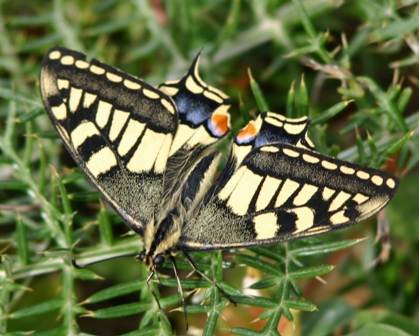 A major breakthrough came in 2001, when American graduate student Alexei Erchak devised an LED containing specialised mirrors and tiny photonic crystals to direct much more of the light outwards. Thanks to his brainwave there is now no excuse for continuing with wasteful old-fashioned light bulbs. Modern LED lamps run cool, save energy, reach full brilliance instantly and can last for decades.

Erchak’s discovery was not a first. Essentially the same technique had been in use for at least 30 million years and maybe much longer. Where? In the brilliantly light-reflecting wings of Swallowtail butterflies. Hundreds of thousands of tiny scales on their wings contain fluorescent crystal slabs and multilayer mirrors that control the direction of reflected light. The whole system is cunningly tuned to brighten the fluorescent blue and green splotches on their wings, and in sunlight those brilliant blue-green flashes send signals to potential mates. Not the most agile of butterflies, Swallowtails do not fly in dull weather. When they see the light, we can see them and so can their mates – over much greater distances than they would if reliant solely on the pigmentation of their wings.

The way Swallowtails enhance reflected light was only discovered four years after Erchak’s breakthrough. Joking recently that butterflies are smarter than science graduates, Erchak said he was amazed at the similarity between structures in the butterfly wings and in his high-efficiency LEDs. 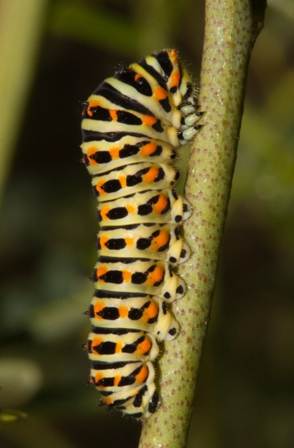 Butterflies brighten our lives in another way, of course. Who doesn’t marvel at the apparent effortlessness of a Swallowtail’s undulating flight in search of nectar-rich flowers? Their new-born caterpillars look rather like bird droppings and so are easily overlooked – by us and by feathered predators, but when fully grown they are almost as compellingly colourful as they become when winged adults.

Although these butterflies are content to drink nectar from a wide variety of flowers, in their larval stage they are fussy feeders, favouring Fennel, Wild Carrot and a few other plants, mainly umbellifers. In Portugal we see Papilio machaon, known as the Old World Swallowtail – a sad misnomer because this species occurs also in some parts of the New World. Numerous subspecies of Papilio machaon are recognised, and among their discriminating features is a variable larval food plant preference.

Iphiclides podalirius also thrives in the Algarve. Fruit trees such as almonds and pears are among the preferred food plants of larvae of our particular subspecies feisthamelii, commonly known as the Southern Scarce Swallowtail. 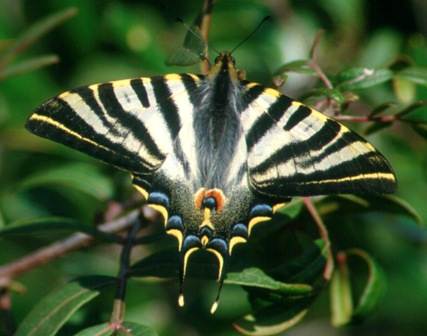 On the other side of the Atlantic butterflies have been idolised for at least 700 years. In Mexico the Aztec goddess of love Xochiquetzal, symbol of beauty and eternal youth, took the form of a Swallowtail butterfly. It seems Xochiquetzal and the many other Aztec deities were not eager to spring to the aid of their worshipers, who failed to fight off the Spanish conquistadors. The Aztec Empire and it amazing culture have come and gone.

Today other peoples, their countries and cultures are threatened by an invader with the power to defeat them all. Silent, unseen and for too long ignored, the new conquistador is invisible, indestructible, and gaining strength rapidly, aided and abetted by… us.

Greenhouse gases such as carbon dioxide in the upper atmosphere warm up the planet. The resulting climate change is chaotic, destructive and, if we delay too long before drastically cutting our fossil-fuel emissions, almost certainly irreversible. Using low-energy LED lights in our homes won’t fix it, but it is a small step in the right direction. One small step for mankind, but a giant leap that Swallowtail butterflies perfected millions of years ago.