A lifelong passion for a subject is no guarantee that you will learn all there is to know about it - to join that select band of people who seem to ‘know everything’ about Portuguese passerines, French patisserie, Etruscan pottery or whatever.  You may read everything you can find, attend study courses, travel the world in search of obscure specimens, but all this reveals is just how much more there is to learn. 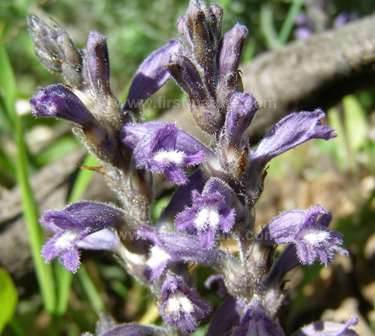 Phelipanche nana is one of the most beautiful of the broomrapes with flowers ranging from pale blue to purple.

So it is with broomrapes. Walking in the countryside, you cannot fail to notice them. Broomrapes usually share the same habitats as the wild orchids that are so plentiful in the Algarve; indeed, at first glance their appearance is quite similar to certain kinds of orchids and, seen up close, quite as intricate and beautiful.  Another characteristic shared by orchids and broomrapes is the difficulty in accurately identifying them. Taking a close interest in broomrapes is very likely to be just as fascinating and frustrating as studying wild orchids.

Broomrapes belong to the plant family Orobanchaceae, which includes both annuals and perennials. The Algarve is a great place for seeing these fascinating plants, as they are more common in the Mediterranean Region than in Northern Europe.  Lacking the chemical chlorophyll which enables other plants to make food from sunlight, broomrapes must obtain the nutrients required for germination, growth and flowering by feeding on plants around them: they are parasites and can inspire both love and hatred.  Botanists love broomrapes for their beauty and, in some instances, their scarcity, some being so rare that their very survival is threatened. Farmers often take a different view, because in abundance broomrapes can devastate food crops.

Broomrape seeds cannot germinate until they come into contact with the roots of their host plant, at which point a broomrape seed attaches itself by means of a tiny thread to the host’s root.  Thereafter the broomrape is able to steal moisture and vital nutrients from its host.

Once it has flowered, a broomrape no longer requires food from the host and so the connection between the two comes to an end; however, if tissue from the broomrape remains inside the root of the host plant it is possible for the parasite to grow and bloom again in following seasons. 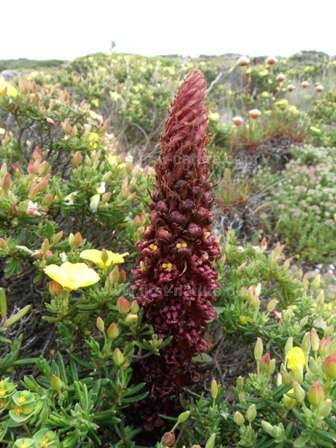 When trying to identify a broomrape, recognising the host plant can help but there are pitfalls to beware of. While some broomrapes parasitise only one host species, others are less fussy and will form relationships with a variety of plants; and, because broomrapes can appear several metres away from their hosts, it is unwise to assume that the nearest or most numerous plant in the vicinity is a broomrape’s host.

Some broomrape species have very few flowers, but others have 20 or more. They are generally pollinated by insects attracted by the scent of the flowers (although they may not smell pleasant to us). The insects are then rewarded with nectar before they move on to other plants nearby. Once pollinated, broomrape flowers produce seeds that can number in their thousands. These tiny, lightweight seeds are carried away on the wind; then during rain they are readily absorbed into the soil, where they may contact the roots of suitable host plants.

The main threat to those broomrapes that are already rare is habitat loss. When farm fields make way for homes, hotels and golf courses the food plants needed by broomrapes disappear, and so then do the broomrapes.

On farms, particularly where pea and bean crops are grown, broomrapes are almost impossible to eradicate.  Because they penetrate the roots of the host, hoeing and weeding between crop rows is pointless.  Broomrapes are also ingested (but not generally digested) by cattle, and so when their manure is spread on the land so also are the seeds of broomrapes.  Reasonably effective strategies for controlling these parasitic plants include deep digging to bury the seeds so far down that they cannot penetrate the roots of host plants, and planting food crops later in the year once the broomrapes have died back.  Increasingly, certain types of fungi are being introduced to the soil to attack and destroy the broomrape tubercles before they have a chance to develop. 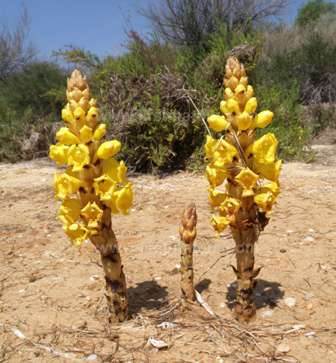 Cistanche phelypaea is a magnificent plant found in sand beside river estuaries.

The best time to see these fascinating plants is in late spring and early summer. Abandoned farmland, where many of the Algarve’s wild pea flowers grow, is a good place to look. Some broomrapes favour sandy soil: estuaries and dunes are excellent places for the yellow Cistanche Cistanche phelypaea and the maroon Stinking Broomrape Orobanche foetida. At up to a metre tall, these two magnificent broomrapes are hard to miss.