At One With Nature - Professor Bernd Gerken

Are you doing your bit for the planet? Carbon offsets for holiday travel;  fruit and vegetables in the garden; warmer winter clothes instead of warmer house; reusing, recycling, composting? You may even have invested in a hybrid car, and forsaken the oh-so-convenient tumble dryer. All these things help but you are still nowhere near to aligning your consumption of natural resources to Nature’s capacity to renew them.  But I know a man who is.

Professor Dr. Bernd Gerken has confronted these environmental challenges   He lives at Haliotis, a wild and beautiful place in southern Alentejo. Go and spend some time with him; you can be sure of a warm welcome from this remarkable man as prelude to an amazing experience. 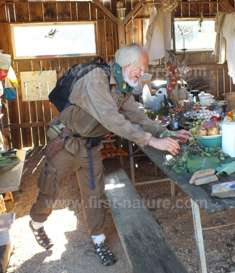 Bernd pictured in his kitchen at Haliotis

So what is Haliotis all about? In part it is about Bernd’s dream of a particular place where he wanted to live, but it is also about something which has a connection deep within all of us who recognize how far our everyday lives have become removed from the real world – our planet.  If what we call civilisation disappeared in the blink of an eye, could we actually cope. What if, for the survival of mankind, we were forced to make the changes to our lifestyles that many of us know are crucial but which we feel powerless to attempt. We talk about ‘global warming’ and ‘ecological damage’ as though they are something new. Our planet has survived far worse than what we are currently doing to it. It is Mankind who will not survive if we continue to denude the world of its natural resources: we must do something!

What you will learn during your visit is that living in an entirely sustainable way is not easy, but it is possible.  Bernd’s life is completely interwoven with nature: its seasons, its weather, its produce, all of which can be difficult and unreliable.  The payback is living in a place of great natural beauty and peace. For some that will be enough to make the hardships tolerable.  For others experiencing life at Haliotis will be enough to provoke them to take the first steps towards leading a more sustainable life – to making small changes that, in time, could make a big difference to the future of mankind.

Let’s not get carried away: Haliotis was not, and still is not, a Garden of Eden.  It is not some gilded glade that Bernd came across on a stroll through the countryside and which welcomed him like a comfortable armchair.  After ten years of back-breaking work, the valley that we see today is emerging from a dark past of unsustainable exploitation by Man. Part of Bernd’s plan is to show that with proper husbandry based on proven ecological principles it is possible to remediate the land and bring it back to a state where it can support the creatures – including mankind - that have depended upon it for millennia. The burgeoning plant growth and insect life, the increase in bird numbers and diversity – these are tangible evidence that Bernd’s theories work in practice.

My visit, with husband Pat, to this hidden valley took place on Boxing Day. The half-hour drive from Fitos to this remote place is along a winding, up-and-down rough track better suited to a four-wheel drive than a puny hire car and driving skills not called for on the M25. The intention was to identify and record some of the numerous fungus species found at Haliotis.  To get a good picture of the spectacular fungal growth there would require a series of visits from September through until April, but even in late December what we saw was impressive. Alongside delicious edible mushrooms such as Chanterelle and Horn of Plenty were many rare, beautiful but definitely inedible species.  We hope to return to record more species and, once spring arrives, to see the rare wild orchids that are making a comeback as a result of the remediation work.  The return of these iconic wildflowers is an indication of land use in harmony with, rather than opposition to, Nature.  As Bernd put it, ‘If Man does not work with Mother Nature she will most definitely continue her work without him, and that always ends in defeat for Man’.

The beautiful valley of Haliotis

The other objective of Bernd’s work at Haliotis is to achieve a carbon-neutral existence.  To this end he has made several lifestyle changes, many of which even those who care deeply about the natural world would find hard to endure. With few exceptions the work at Haliotis is done without the aid of machinery. Terraces for growing crops are dug manually, buildings are constructed and renovated without the use of power tools, heating is from deadwood taken from the trees and the valley floor, the only toilet is a compost toilet, and cold showers are the only type on offer.  Power for the few electrical devices that are used in daily life - food liquidiser, stereo, phone charger - is provided by a photovoltaic panel.

More controversially, Bernd eats only raw food, most of which is foraged from the land and topped up with a few purchases from local markets. As a fanatical lover of food and cooking I would resort to this tactic for reducing my carbon footprint only if a gun (or perhaps a bow and arrow would be more appropriate at Haliotis) were held to my head.  Surely cooking with a wood-burning stove fuelled by deadwood collected by hand from the surrounding land would not significantly increase my ecological footprint! I finally concluded that Bernd believes that raw food is a much healthier option than cooked food, and after much humorous debate we agreed to differ.

While repairing the devastated land at Haliotis, Bernd has also helped to repair devastated lives. Anyone who is prepared to work is welcomed and charged only enough to cover the costs of their stay.  The absolute peace and beauty of the place comes as part of the package, as does the raw food - although as a major concession plain boiled rice is available for those who cannot cope with dandelion and oak leaf smoothies on a daily basis!

So what do we make of this man and his lifestyle?  A latter day cave man he most definitely is not. Neither is he some peddler of half-baked lifestyle theories based on non-scientific assumptions.  Bernd Gerken is a highly qualified and respected professor in the field of ecology; he has written and contributed to numerous books and research papers.  The changes resulting in his current lifestyle have been gradual, and indeed he cannot altogether eschew the world outside Haliotis, because he is still in great demand as a speaker, and as a contributor to ecological projects running in many countries. Here is a man who cares deeply about the future of the planet and all who depend upon it for their survival. What is more, he is prepared to walk the walk in order to prove that we can lead sustainable lives that are at one with Nature. 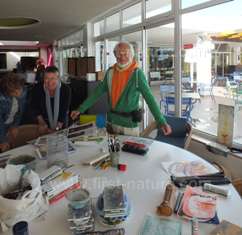 Despite all this, I did not leave Haliotis feeling that my own efforts to lead a sustainable existence were devalued by Bernd Gerken’s greater sacrifices and far greater achievements. I felt humbled, certainly, but also inspired that an individual would go to such lengths to achieve his dream and that he would be so willing to show others how to achieve such a worthy goal.

The visit provoked me to ponder what else I could do to make my own way of life more sustainable. I was not driven to conclude that civilisation has had only negative impacts upon the planet and that throwing the baby out with the bathwater is the only option for fixing things.  I left feeling that small steps taken by all of us could achieve a lot that would justify this kind man’s tremendous optimism for the future of mankind on earth.  This is not a man running away from an unfulfilling past, he is a man running towards a bright future with joy in his heart and a big twinkle in his eye.

To find out more about the work at Haliotis you can email Bernd: bghaliotis@gmail.com