At One with Nature - Toast of the Coast - Sue Parker explores sand dunes, where preservation can conflict with conservation.

Among the Algarve’s most special wildlife habitats are our coastal sand dunes. From Odeceixe down to Cape St Vincent and then eastwards to the Guadiana Estuary on the border with Spain, towering cliffs and sheltered coves are interspersed with magnificent sand-dune systems.

Formed by sand being blown inshore from the exposed seabed during low tides, dunes are naturally mobile.  When left to Mother Nature, dune systems present a foretaste of hell to those who seek certainty and stability in their lives: windblown sand can cover a building or even a whole caravan park in just a few hours. Man’s weapon of choice in this battle with Nature was Marram. This fast-growing, deep-rooting grass binds sand particles together and anchors them, making it possible for other shrubs to take over. It was planting Marram that ultimately enabled people to build upon what is some of the most desirable living space on the planet. 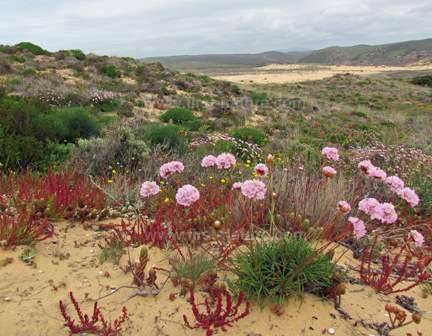 Considering how badly coastal dune systems have been abused elsewhere in Europe, mainly to create residential and holiday homes and golf courses, we can take pride in the pristine nature of so much of the Algarve’s coastal dune systems. Here, despite extensive coastal development (such as at Salgados, where yet more of the natural beauty of our coast could soon be destroyed) large areas of coastal dunes remain intact, in part at least thanks to the protected status of natural parks and nature reserves.

Why so many of Europe’s sand dune systems have been damaged or destroyed is obvious: the coast is as attractive to Man as it is to the plants and animals that lived there long before we arrived on the scene. The problem is that, whereas wildlife has evolved and adapted to live in dune habitats, people see them as fundamentally inhospitable places. Rather than adapt to a habitat we alter the habitat to suit us. Curiously, it is not just developers who have contributed to the degradation of much of Europe’s coastline; nature lovers got it terribly wrong too. Their mistake was to assume that habitat preservation would guarantee wildlife conservation.

In Holland, the UK and elsewhere conservation agencies are actively de-stabilising dune systems, using digging machines to create artificial ‘blow-outs’ - patches of bare sand that are produced continuously in natural dune systems. There are encouraging signs that the strategy is working and that endangered plants and creatures are beginning to make a comeback in places where they were once common.

Despite its bare, moonscape-like appearance when seen from a distance, the Algarve’s coastal sand-dune belt is alive with wildlife. In spring and early summer the dune slacks (flatter, moister areas in between the dunes) are bejewelled with colourful wildflowers. In summer birds nest and raise their young in the tussocky vegetation, and in autumn strange fungi emerge from the sand to amaze and delight the observant. Added to this the coastal views from some of the taller dunes are breathtakingly spectacular. 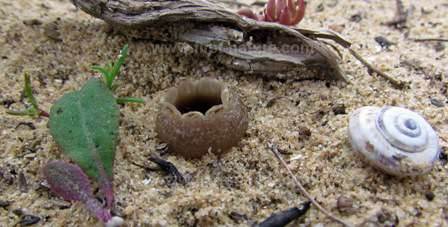 Ecologists signed up to this strategy too. The thinking was that by stabilising the dunes they could better protect plants and creatures - many of them rare - that made their homes there. Only in recent years have conservationists realised that dune stabilisation has actually driven to extinction hundreds of plants, insects and other wildlife that over countless millennia had evolved to thrive in places where we couldn’t. These so-called pioneering species cannot survive and multiply without extending their territories and hunting grounds; they need ‘new’ mobile sand blown in from the sea. 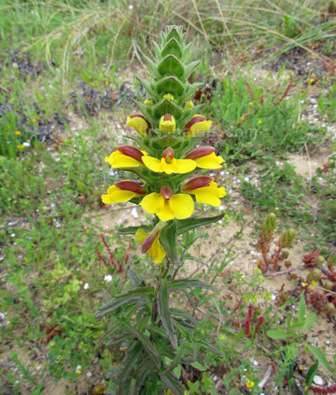 Some of the best places to visit and enjoy this unique habitat include Parque Natural da Ria Formosa (Olhão), where there are easily accessible board walks and nature trails; Salgados (near Armação de Pêra); the nature reserve at Ria de Alvor (near Alvor), where there are literally miles of boardwalk; at Carrapateira (off the road between Vila do Bispo and Aljezur); and at Amoreira Beach, near Odeceixe. At Monte Clérigo, near Aljezur, there is an amazing phenomenon: the dune system is perched on the cliff tops. For maps and full directions of how to find these places visit the Wildlife Walks section...

The seaside is a great place for picnics, but in sunny weather dune systems sheltered from the cooling sea breezes become extremely hot. When walking in sand dunes use sun block and take plenty of drinking water – and of course keep dogs on their leads, particularly during the spring and early summer bird nesting season. During the next few weeks the Algarve’s coastal wildflowers should be at their stunning best, so don’t waste a moment: get out there and enjoy all that is on offer in prime examples of one of the world’s most endangered wild habitats.