Ignoring the example set by the early spring bulbs, whose fabulous fireworks displays light up our landscape, the Algarve’s wild orchids begin with something of a damp squib. Gennaria diphylla is small, green and unimpressive, and by late February it has flowered and is already setting seed. Even to the hoards of devout orchid pilgrims (never say twitchers; that is strictly for the birds) who set off for their Mediterranean Meccas to kneel at basal leaf rosettes in worship, this is an uninspiring orchid. Gennaria diphylla has just one interesting feature: like Tigger, it is the only one. (The Gennaria genus contains just this one species, but it is something to look out for while we wait for the true beauties to burst into bloom.) 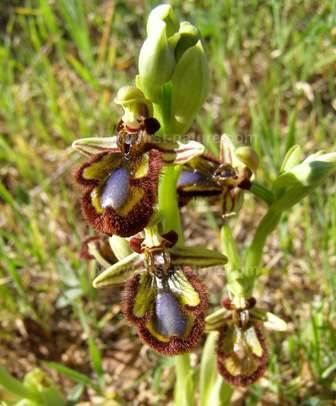 The Algarve is snootily dismissed by some wild orchid ‘experts’ as beyond its use-by date because coastal development in recent years has replaced formerly orchid-rich land with golf courses and pretentious garden palms no more native than the English rose. They are not only wrong, but their misguided prejudice is costing them the chance to see some truly amazing orchid extravaganzas

What has changed is that to see the Algarve’s finest orchid wonders you have to travel a little bit further from our coastal towns and holiday resorts, but those prepared to make the effort are more than amply rewarded.

What has not changed significantly – and in this respect the Algarve has the edge on the rest of western Europe – is the habitat quality of most of our countryside. We have so far avoided the worst enemy of wildlife species – intensive farming. There is still a wealth of wonderful places throughout the Algarve where people can enjoy nature in general and, in particular, wildflower displays at their very best. At least twenty-five Mediterranean wild orchid species thrive in the Algarve. Among them are some special gems rarely if ever seen in most other parts of Europe. For those seeking a spring cure for their powerful addiction, the marvellous Mirror Orchid Ophrys speculum is the must-see member of the bee orchid family, and the Algarve is its World HQ. 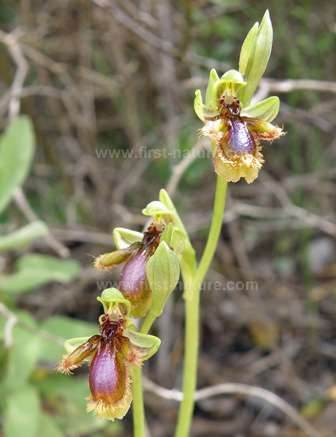 Even the uninitiated will know when they have found a Mirror Orchid. The startling glint of sunlight on the silvery-blue lacquered lip of the flower - the feature that puts the ‘mirror’ into Mirror Orchid - is an irresistible invitation to enter into the mysterious world of these amazing plants.

Bee orchids have evolved to play tricks on unsuspecting insects and so secure the future of their kind, imitating the appearance and sometimes the smell of particular kinds of female insects. Smitten males are fooled into landing on the flowers. There, instead of being greeted by a mate, they are tricked and treated to a burden of pollen which they may transport to other flowers of the same species. Job done – for the orchid if not the insect!

In this story it is the mirror that is the fairest of them all, and just like Cinderella the Mirror Orchid has two ugly sisters. One of these, despite being a near neighbour is rarely seen. Ophrys lusitanica is also centred on the Algarve and it too has a shiny metallic-looking lip, but there the similarity ends. Regarded by some authorities as merely a subspecies of the Mirror Orchid, it is otherwise a tragic travesty of its beautiful sister, trailing behind her by three weeks or so and hanging about on stony edges of dusty tracks. Despite this, its rarity makes Ophrys lusitanica one of the most searched for orchids in the Mediterranean region, and another of the Algarve’s tourist attractions. The second of the ugly sisters, Ophrys regis-ferdinandii, lives in exile in the Greek islands, where it is also a foil to the beauty of the rare (there) Mirror Orchid. 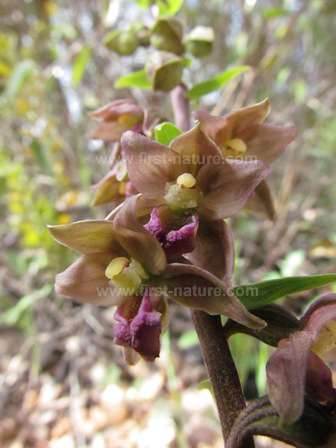 Encouraging wildlife tourism is one of the Algarve Tourist Board’s top priorities, and yet we see approval for the building of yet more holiday developments aimed at anyone but those who value the natural world. Allowing development to encroach further onto the Algarve’s prime wildlife habitats could drive already threatened species, including wildlife tourists, to extinction. There are many abandoned holiday developments dotted about the Algarve; they failed because income could not cover the high cost of maintenance. In contrast many of our natural ‘golden eggs’ are truly self sustaining, requiring only minimal conservation management and protection.

Some residents maybe unaware of the wealth of wild orchids in the Algarve, which in places carpet the ground and are not at all hard to find, but orchid hunters and other wildlife tourists certainly know. In March and April, when other tourism is sparse, these eco-tourists are particularly important to the economy of the region.