At One with Nature - Algarve Wildlife – tales of the unexpected

Whenever I happen upon something unusual on a countryside ramble in the Algarve I am struck by the serendipitous nature of nature (and life). So often I find the sole specimen of a particular orchid within a large area where there are no signs of any others; the only fungus of a particular type in a woodland; or see just one rare butterfly, moth or bird.

Rarely are these encounters the result of reading up on the habitat requirements of rare species; I simply stumble across them by chance, putting it down to the ‘dumb luck’ of having arbitrarily turned right instead of left at a branch in the path. At such moments of triumph I feel immensely privileged to be in the presence of something I may never again see during my short span on the planet.

On the subject of how short life is… if you have a lifelong ambition to experience something special, there comes a time when you really must get on with it while you can. That’s where expert help can be invaluable. Quite early in my Algarve life, as a result of yet more serendipity, I met up with Clive Viney and Ray Tipper. Both are tremendously knowledgeable about the wildlife of the region and, in particular, the wealth of birds that can be seen here.

A birding day out with Ray is a revelation. Keen on birds since boyhood, it was not until he moved to Hong Kong that Ray became interested in photographing them. In 1990 he became an associate of the Royal Photographic Society, and his pictures have appeared in books all over the world. A member of the Portuguese Rarities Committee, Ray spends most of his time in the Algarve, but he also leads bird tours in many other countries throughout the year as well as taking people out closer to home.

In today’s world of specialisation Clive is a very rare creature – a naturalist with an interest in everything the natural world has to offer. Closely associated with the Algarve since 1988, Clive has participated in many major bird surveying projects organised by the authorities here. He also gives lectures and talks, and he delights in introducing both Algarve visitors and residents to the profusion of wildlife in the region.

Confessing my own dependence on good luck, I asked experts about some of their unexpected wildlife encounters. Let’s hear first from Clive… 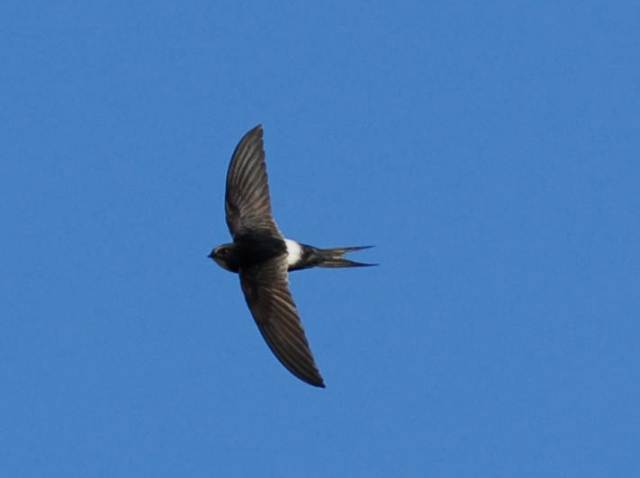 Most countries of Western Europe have a host of volunteers eager to study and record their country’s wildlife. Sometimes in England I feel that someone knows every bird, be it on a garden feeder or nesting on a cliff face. Here in the Algarve it is quite different. When I began to spend more time here I was amazed at how little was known about the birdlife. I eagerly participated in bird surveys organised by the fledgling Sociedade Portuguesa para o Estudo das Aves (SPEA), soon discovering that I was the only regular participant in the eastern Algarve. Today, twenty years later, there are more of us but it still is highly enjoyable pioneering work and discoveries are forever being made. Volunteers are always welcome. 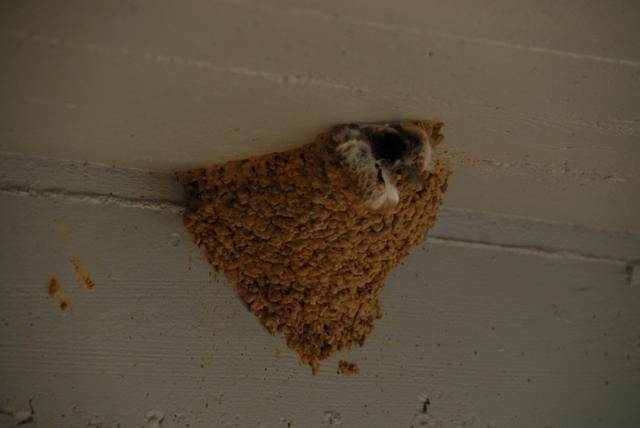 The White-rumped Swift, essentially an African breeding bird, is widespread south of the Sahara. During the summer in the early nineteen-sixties, to the surprise of ornithologists, a few of these distinctive swifts began appearing in southern Iberia. They were spreading northwards. The species remained, however, a great rarity and consequently was much sought after by those who list sightings of European birds.

At sunrise on the 19th June 1999 while surveying the breeding birds of a tributary of the Ribeira de Odeleite west of Alcoutim, I was pleased to note Crag Martins and Red-rumped Swallows nesting under a new bridge over the stream. To my surprise two swifts with striking white rumps were flying over and even, with great agility, under the bridge. With white rumps they could not be our regular Common Swifts or Pallid Swifts. Little Swifts were a remote possibility but they are smaller and I knew them well from overseas. Excited (in my mind I could already hear the orchestra playing) I guessed that they were extremely rare White-rumped Swifts and thus only the second substantive record for Portugal. Even more exciting, the birds were obviously displaying with much rapid wing quivering and even gliding with the wings held vertically above the body. 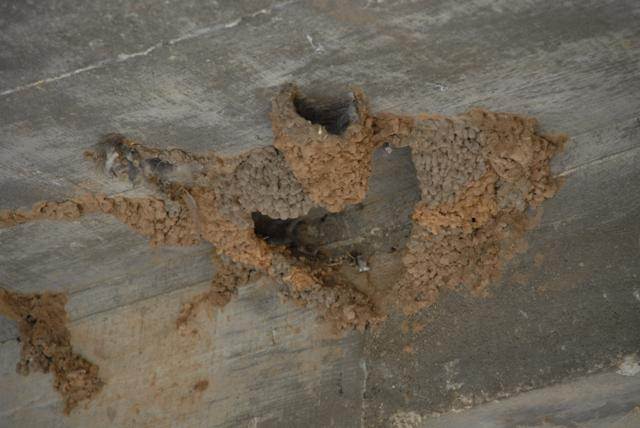 The nest was eventually destroyed

The swifts were greatly interested in a bottle-shaped Red-rumped Swallow’s nest under the bridge. Later visits that summer confirmed that the pair of swifts was using the nest to raise their own young. It is not clear whether the swifts had evicted the swallows or simply using a nest that had been abandoned but they had lined the entrance with feathers, perhaps to deny the swallows access.

This event caused a great deal of excitement beyond Portugal and I wrote up the discovery in the respected journal Dutch Birding. The progress of the swifts was closely monitored, and pairs of White-rumped Swifts returned to the bridge for many years to come. Not every year was breeding successful, as sometimes the nest was mindlessly knocked down - perhaps just to see what was inside.

White-rumped Swifts remain elusive but are more regularly seen nowadays, especially in the Odeleite Valley. They breed at other sites too, but in sparsely populated countryside rarely visited by birdwatchers. Following the extensive road-building programme in the Algarve hinterland, the Red-rumped Swallow population has increased enormously. Many new bridges and conduits provide protected surfaces for the nests, and as a consequence White-rumped Swifts have also benefitted. Yet they are still a very unusual sight anywhere in Europe.

And now it’s Ray’s turn (is that spelt right?)… One Good Tern 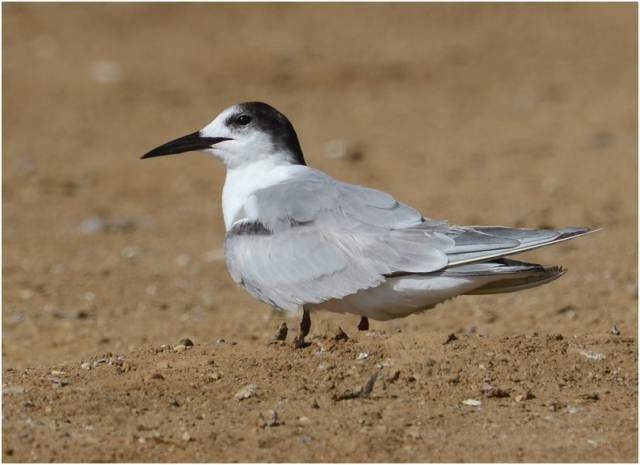 Sixty plus years a birdwatcher yet field trips can still hold huge surprises. For me birdwatching remains a joy, but a long time ago now bird photography became a passion. And so it was last July that I visited the saltpans at Olhão. I had never photographed a Common Tern in Portugal and I had set myself that target. Despite their name, Common Terns are far from common in the Algarve. They are at their most numerous here in late summer and autumn when adults and young of the year are migrating from breeding grounds in northern Europe to wintering quarters around the coast of southern Africa. Sometimes one or two visit the Olhão saltpans, but on this day I was pleased to find at least seven resting on one of the earth bunds that separate the individual pans. I moved cautiously towards them. They were among a flock of gulls and if one was spooked and flew then the likelihood was they all would and the opportunity would be lost. 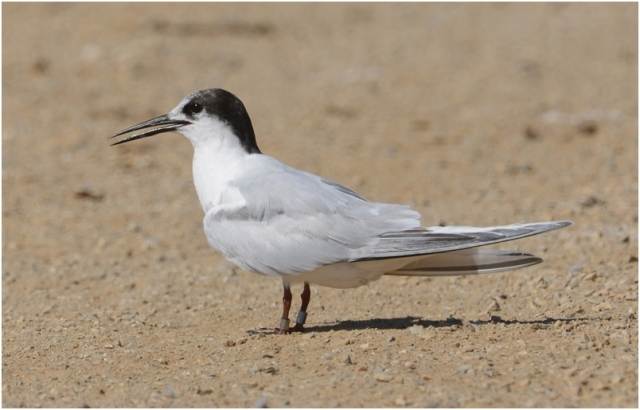 An immature Roseate Tern with both legs ringed

Before I got within photographic range, the inevitable occurred. They became unsettled and individuals began to fly away. But it was just the gulls that were departing; the terns were staying put. Before I was really close enough, I took a few photographs as insurance, noticing that the terns were of different ages. Adults have black-tipped red bills in summer that gradually turn black as winter draws in, while immatures’ bills are black and only turn red after their first winter. It was no surprise, therefore, that several of the birds had black bills.

I risked moving a little closer and, as one, the terns flew. This was my lucky day, however, for they merely circled and came back to settle almost precisely where they had been before. I focused on one that had landed a few metres away from the others. My heart skipped a beat. This bird was not the same. Its bill was all black for sure, but the shape was very subtly different – a bit longer and more slender. Surely this was a Roseate Tern, a major rarity in Portugal. Time to stay calm, take a deep breath, check carefully again and compare with the nearest tern to it. Yes, the bills were different, very slightly but definitely different. Now check against another tern. Oh dear! (Not quite the expression I used.) This bill was the same as my putative rarity’s. So it was a Common Tern after all but with a small variation in bill-shape. Elation turned to despair. At least there was the consolation of having the photographs I had set out for.

When I downloaded and studied my photos that evening, nagging doubts returned. Those bills really were different, or were they? One of the two birds was wearing leg rings although the identifying code was not fully legible. I logged on to the internet. The largest breeding colony of Roseate Terns in Europe is on Rockabill, islands off the coast of County Dublin, and each year all the nestlings are ringed. I emailed a photograph to Birdwatch Ireland’s Senior Seabird Conservation Officer who confirmed this was indeed a Roseate Tern that had been ringed on Rockabill. I was on Cloud Nine, again.

Clive Viney and Ray Tipper are co-authors of Algarve Wildlife – the natural year, one of the most successful books about the Algarve.