Nature Conservation Projects in the Algarve

This project aims to restore the main habitats of the Monchique area which was devastated by the massive wildfire of 2018. It is supported by a number of partners including Ryanair.

The River Seixe, which effectively marks the border between the Algarve and Alentejo, rises in Monchique and enters the sea at Odeceixe. It runs through a beautiful valley which is recognised as an area of great importance for both birds and plants - a true biodiversity 'hotspot'.

Despite being accorded protection due to its status as part of the Natura 2000 Network, its unique environment is subject to a regime of abuse and destruction by the introduction of eucalyptus plantations which have blighted so much of the area's biodiversity, and which now threatens to destroy completely this vital fragment of true Mediterranean woodland

The joint TerraSeixe team (put together from a number of organisations) has devised an ambitious project to implement conservation and environmental stewardship in the valley. It hopes that by establishing a management practice that works harmony, not conflict, with nature that further damage to this vital habitat can be halted and that the many species that depend upon it for their survival can be saved.

Find out more about TerraSeixe....

Created and promoted by Zoomarine, through its TOGETHER WE PROTECT philosophy, “Operation Green Mountain” launched in 2016 with a view to building the civic involvement of residents and tourists to promote the collective protection of the region's natural values Algarve.

In 2019, and in a regime that allows the presence of families (Sunday, November 10) and school groups (Monday, November 11), this voluntary initiative will plant 42'000 trees in eight counties (Silves, Loulé, Portimão, Monchique, Tavira, São Brás de Alportel, Lagoa and Olhão).

We count on the support and collaboration of all of you, to continue contributing to the very urgent help for the protection of our collective future ...

Find out how you can make a contribution...

New! Find out about Portugal's involvement in a project to conserve ancient cattle breeds... 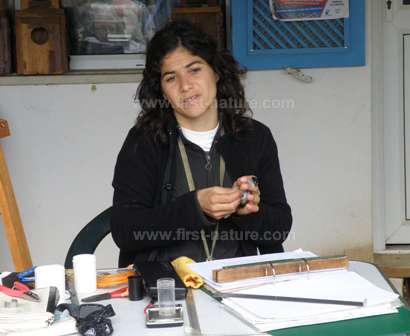 Getting information about wildlife in the Algarve can be difficult and frustrating: directions and signage for nature reserves are in short supply, and when you finally arrive it is to often find that information boards have either been vandalised, or are so badly weather-worn that they are indecipherable.

The pace of development, particularly along the coast, can lead you to believe that soon nothing will be left for the wildlife lovers among us to enjoy. Despite this, and the devastating economic recession which has put such pressure on any but essential projects, nature conservation is alive and well in the Algarve and there are a number of organisations actively involved in conservation projects.

This section describes some of the work being carried out in the Algarve to promote wildlife conservation and the people behind them.

Some of the many initiatives include bird migration monitoring, improved low impact access to nature reserves and an Iberian Lynx conservation project based near Monchique.

Conservation Projects in the Algarve