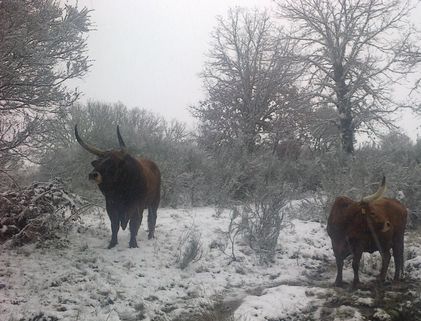 Hard to imagine that the peaceful cattle that produce milk and meat for us today were once wild creatures roaming throughout Europe and Asia? Think of the Bison (Buffalo), one of the most protected species in America's National Parks where people in their thousands flock every year just to catch a glimpse of these iconic creatures.

In Europe and Asia we had Aurochs which were domesticated in Neolithic times but then became extinct during the sixteenth century.

The Uruz Project aims to find cattle breeds that are most closely related to this ancient breed, and it appears that in Portugal we still have cattle that could well be related to those ancient hardy animals.

Several rare old breeds of cattle can still be seen in Portugal; they include Maronesa, Barrosa and Raça Brava. The first priority of project work here is to conserve and increase the numbers of these animals. This is being done not only for scientific study but also for the benefit of future generations, who could find that preserving these old breeds has practical as well as cultural value.

After years of boosting the growth rate of cattle with antibiotics and other drugs, modern breeds are becoming less resistant to bacterial diseases. This is because bacteria have mutated to become immune to current medial treatments. At the same time with ever increasing human populations around the world, land and food essential for the success of these pampered cattle is now at a premium.

This is why ancient breeds are seen to offer hope for the future. Being much hardier, these animals are able to graze in wild inhospitable areas rather than requiring improved grasslands that could otherwise be used to produce other food crops for people. All of this suggests that rearing these hardy old breeds of cattle, which are able to cope with the predators that are their neighbours in such wild places, must be a much more sustainable option.

The appearance of some of the very rare Maronesa cattle echoes much of what we know about he ancient Holocene Iberian Aurochs. Similaries include horn growth and the fact that some of them grow special winter coats which are the same colour as those of the Aurochs.

By advising local farmers how they can care more effectively for these valuable animals, and by buying some of them, the Project Team hopes to generate sufficient numbers so that some of them can be released into the kinds of terrain that their ancestors would have grazed, to study the results and to see if the stocks become self-sustaining.

Aurochs played a vital role in the development of mankind and had great impact on human culture, which is clearly visible from the frequency with which they feature in ancient cave paintings.

If you would like to learn more about this fascinating project, or to contribute in any way please go to: True Nature Foundation