Praia do Faro and São Lourenço Lake - part of Parque Natural da Ria Formosa. A wildlife walk to see the fascinating birds of the area.

A walk through this part of the Parque Natural da Ria Formosa is one of the best ways to see many of the bird species that make the Algarve one of Europe's top destinations for birdwatchers. Birds are not the only attraction of the area, and in springtime, it is also an excellent place to see many of the Algarve's special wildflowers, butterflies and other insects.

We were extremely lucky to be accompanied by Ray Tipper, a renowned birdwatching guide and bird photographer, on our first visit to this particular part of the Ria Formosa Reserve,which took place in February - early springtime in the Algarve.

Ray, who lives in the Algarve, is co-author of Algarve Wildlife - the natural year which, since its publication in September 2009, has become the best-selling book for those interested to learn about and see the wonderful wildlife of the region. Ray's intimate knowledge of Portugal and its birds has been recognised by his appointment as Chairman of the Portuguese Rarities Committee. 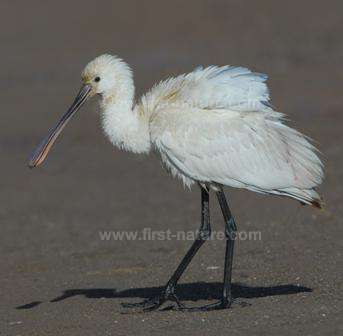 A Spoonbill - this part of Parque Natural da Ria Formosa is one of their haunts. Picture: Ray Tipper Licence enquiry...

The walk in this fascinating area lies between Faro Airport and the town's extensive beaches. Special features of the route include a viewing point across a vast valley reedbed, extensive saltpans, a river and São Lourenço Lake. The lake and the saltpans are magnets for waders and other waterbird species.

São Lourenço lake, with two bird hides in its vicinity, is manmade and was constructed in mitigation for the loss of natural habitat as a result of building a golf course in the highly sensitive wildlife refuge of Parque Natual da Ria Formosa. The lake forms a central feature of the São Lourenço Golf Course, but despite the continuous procession of golfers working their way down both sides of the lake, and a deluge of unguided missiles in the form of golfballs, the birds seem remarkably at home and completely unperurbed in this contrived habitat. 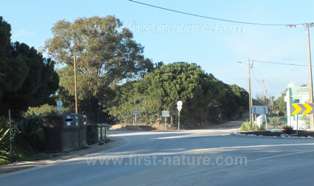 The turn towards Pontal

From either the main A22 toll road or the N125, follow the signs to Faro Airport. At the airport roundabout (with the skyward-staring statues) take the first exit towards Praia do Faro. Take the first right hand turn off this road and proceed to a roundabout, where you turn left to Pontal. Continue along this road, which becomes a track immediately upon exiting the roundabout, for a few hundred metres before finding a suitable place to park on the roadside. Continue on foot, either up the slope on the right hand side of the early part of the track (to see the valley reedbed) or ahead to the saltpans (salinas), the river and San Lourenço Lake.

There are no facilities during the walk, except at the golf club, but there are plenty of shops and cafes in the Faro area and, of course, at the airport. There is a garage on the main airport roundabout where you can buy drinks and other refreshments.

The walk is very easy-going along a wide track from which it is very easy to view the birdlife. 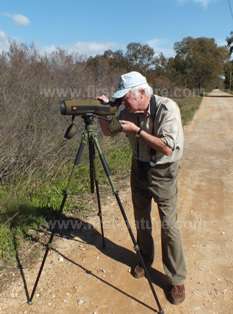 Although we are great lovers of wildlife in general, neither of us is very knowledgable about birds. Having Ray Tipper accompany us on the walk enabled us to get far more out of our visit and to see many more species than we could ever have dreamed of if left to our own devices. By using Ray's excellent bird scope and borrowing his (far superior to ours) binoculars we were also able to see birds a considerable distance away from the track. Although many of the special species were remarkably close to the track there is no doubt that we saw far more birds than we would have done without the benefit of good optical equipment and Ray's ability to recognise species at considerable distances!

Our first stop was the vantage point across the reedbed. There we saw Serin, Great Tit, Common Chiffchaff and both male and female Stonechats. Male Stonechats are immediately recognisable, even to us, but we were greatly surprised by how different in appearance the female is, almost to the point of looking like a different species. We could also hear the strident call of Cetti's Warbler. Since this bird is far more often heard than seen, it highlighted the tremendous advantages of being able to recognise bird calls, both in terms of locating them and then accurately identifying them. After about half an hour of looking and listening we moved on from the reedbed and made our way back down to the main track, but not without seeing some of the early spring flowers for which the Algarve is so famous: Yellow Hoop Petticoat Daffodil - Narcissus bulbocodium - was abundant, as also was the delightful mauve Romulea - Romulea bulbocodium. Both Common Rockrose - Helianthemum nummularium - and Spotted Rockrose - Tuberaria guttata were in flower, and several of the cistus bushes were bursting into bloom including the gorgeous pink Cistus albidus and Sage-leaved Cistus - Cistus salvifolius with its brilliant white flowers. The exceptionally warm day and presence of flowers brought out a Red Admiral butterfly to patrol the plants in search of nectar. 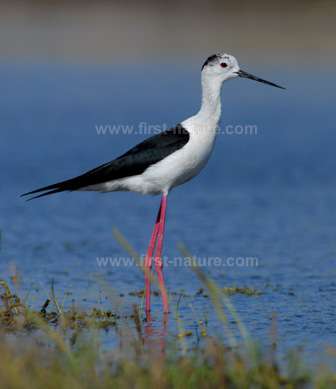 A Black-winged Stilt - we saw many of these during our walk. Picture Ray Tipper Licence enquiry...

Our walk along the main track very soon brought us to the first of the saltpans, where the numbers of bird species waiting to be discovered increased considerably. This area is a superb place to see waders, and we had an absolute bonanza of species to admire: Common Redshank, Greenshank, Dunlin, Black-winged Stilt, Sanderling, Black-tailed Godwit, Bar-tailed Godwit and many more. All of these, accompanied by continual calling of Cetti's Warbler, Green Woodpecker, Sardinian Warbler, Common Chiffchaff, Great Tit and many others, created a near sensory overload! Even better was to come. We heard and then saw a Booted Eagle as we continued along the path towards what Ray described as a Storks' Condominium. This consisted of two or three trees set back about 200m from the track and quite literally covered in White Storks and their nests. Had they not been clearly visible we would certainly have known of their presence by the continual clacking of their beaks. Although this sound is often misconstrued as two birds tapping their beaks together it is, in fact, the result of of the rapid opening and closing of the upper and lower mandibles of a single bird. What little room was left in the trees was taken up by several Cormorants, perched, placidly preening themselves amid the clattering mayhem of the Storks.

Our next stop was beside the São Lourenço River, which runs into the sea through the area of saltpans. The river was covered with large numbers of various ducks, although Ray told us that autumn is the time to see the really vast flocks which arrive to over-winter in the Algarve. We saw Eurasian Wigeon, Shoveler, Pintail, Gadwall, Mallard, Teal, Pochard and in the distance, Purple Swamp-hen - a rail. After a considerable amount of time spent trying to work out exactly how many species of duck were living in this small part of the river we moved on to one of the real highlights of the day: standing, and almost asleep, on a small rickety bridge bedside the path was an immature Spoonbill. Along with many of the birds we saw, he showed almost no anxiety as a result of our presence, and allowed us to get really close, taking possibly the best photographs of the day. 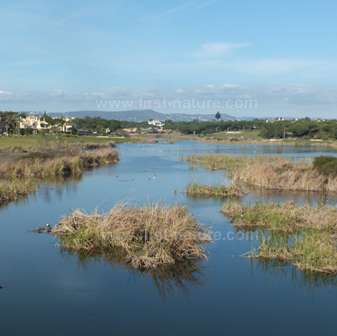 A view across the lake at San Lourenço Golf Course

We continued along the path in the direction of the São Lourenço Golf Course to a place where many more treats were in store, not least of which were the remains of some Roman salt stores on the way. The lake is right beside the path, almost rendering the excellent two-tier bird hide, also right beside the lake, an irrelevance except for the lovely overview of the water obtained from the upper level. The lake was literally alive with birdlife: numerous ducks were there along with of a pair of Great Crested Grebe, many Coots and Moorhens and various gulls including Black-headed Gull and Mediterranean Gull. We were nearing the end of our time with Ray, but there was still one more thrilling treat in store for us: the sudden emergence of a Little Bittern from the reeds immediately in front of us. Although, as Ray explained, this is one of the top sites to see Little Bittern, even he was surprised to see one so early in the season and surmised that it might even have overwintered in the Algarve.

As we re-traced our steps back to the car, Ray spotted a Black-headed Weaver. These are most definitely not native to the Algarve but,as the result of an escape from a zoo or cage, a viable population has become established there. Just one more surprise in a day of absolute wonder in the company an expert only too happy to share his tremendous knowledge, and of course, in the company of the wonderful birds of the Algarve.

Ray leads specialist birdwatching tours all over the world, and since 1997 has led more than 100 tours in Europe, North and Central America, Asia and Madagascar. He also accompanies parties on birdwatching and photography trips in and around the Algarve. If you would like to find out more about Ray's trips email here...