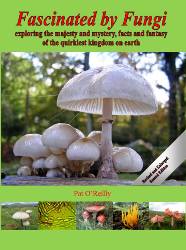 In the UK since its launch in September 2011 this has been at the top of the bestseller lists for non-specialist books about fungi, with tremendous acclaim in book reviews.

In Portugal this book is available by post from the Mediterranean Gardening Association Portugal. Purchase online here...

SPECIAL OFFER online for delivery to the UK ONLY...

"If you buy only one book about fungi, this should be it"

"To be bang up to date you have to get Pat O'Reilly's amazing book, a 'must have' with more than 1000 wonderful photographs. It combines one of the most readable and deliciously idiosyncratic accounts of what fungi are, where they come from and what they do for us with an excellent identification guide almost uniquely based on habitats. Excellent diagrams and photographs are provided to explain all. If you want to photograph it, look down a microscope or just eat it, there is all the help you need to get started and maybe become an expert.". Ray Woods, review in Plantlife Magazine, Winter 2011

"It's fantastic. For years, I have been looking for a good guide to fungi that includes identification tips, the kind of habitat that it frequents and similar species, and at last it's here.". Iolo Williams, BBC Wildlife Presenter

"...this is a tour de force, a tremendous achievement in bringing this extraordinary kingdom to life... With its originality, freshness of approach and liveliness of text, I would like to think that Fascinated by Fungi will become a classic text, introducing a new generation to the wonders of fungi.". James Robertson, review in Natur Cymru, Winter 2011-12.

“A clear, logical guide to a crucial part of our life support system; the kind of book that most people (including me) really need.”. Roger Thomas, Chief Executive, Countryside Council for Wales

"Its fantastic! Everything I wanted in a fungus book is there." Penny Turner, Drymos, Greece

Pat O’Reilly’s fascination with mushrooms and other fungi stretches back more than 40 years and has taken him to many countries; but, as he says, there is a special satisfaction in finding and identifying beautiful fungi close to home.

Writing and broadcasting on wildlife and countryside topics for more than 30 years, Pat is the author of more than 20 books and hundreds of articles. With his wife Sue he produced and maintains the First Nature website, which receives up to a million visits a year and hundreds of enquiries via an extensive Fungi section.

Pat, an active conservationist, has chaired and served on several advisory committees and special commissions. He served as a member of the Council of CCW (the Countryside Council for Wales), where his specialismst were fungi conservation (he is a Member of the British Mycological Society) and the management of National Nature Reserves in Wales.

For his environmental work Pat O’Reilly was awarded an MBE in 2003.